When Daniel Mendelsohn was a child, the Holocaust was a topic never to be discussed. His family was haunted by the disappearance of six relatives during that time, a mystery that intrigued him for years. The Lost is the story of Mendelsohn’s search for his missing family members, a quest that took him to twelve countries on four continents, and forced him to confront the many discrepancies between the lives we live and the stories we tell.

Deftly moving between past and present, The Lost transforms the story of one family into a profound meditation on our fragile hold on the past. Suspenseful, deeply personal, and beautifully written, this literary tour de force illuminates what is lost, and found, through the passage of time. Daniel Mendelsohn is a regular contributor to The New York Review of Books and also writes for The New Yorker, the New York Times Book Review, and the New York Times Magazine. He is a winner of the National Book Critics Circle Award for Excellence in Criticism and is the author of The Elusive Embrace. Mendelsohn holds the Charles Ranlett Flint Chair in Humanities at Bard College. He lives in New York City and Trenton, New Jersey. “Mendelsohn succeeds in assembling an immensely human tableau in which each witness has a face and each face a story and destiny.” — Elie Wiesel, Washington Post Book World

“The Lost is the most gripping, the most amazing true story I have read in years. . . . Enthralling. . . . An immensely moving and beautifully written book.” — Charles Simic, The New York Review of Books

“A remarkable personal narrative -- rigorous in its search for truth, at once tender and exacting. It is deeply moving, often distressing, sometimes funny. . . . Mendelsohn succeeds in assembling an immensely human tableau in which each witness has a face and each face a story and destiny.” — Elie Wiesel, Washington Post Book World (front cover)

“Daniel Mendelsohn has written a powerfully moving work of memoirist appropriation of a “lost” family past in tones reminiscent of the richly expansive prose works of Proust and the elusive texts of W.G. Sebald—a remarkable achievement.” — Joyce Carol Oates

“Epic and personal, meditative and suspenseful, tragic and at times hilarious, The Lost is a wonderful book.” — Jonathan Safran Foer

“A stunning memoir. . . . Beautiful and powerfully moving. . . . As suspenseful as a detective thriller, and as difficult to put down. . . . . What makes The Lost so extraordinary is how loving it is.” — O, the Oprah Magazine

“The Lost is a sensitively written book that constantly asks itself the most difficult questions about history and memory.”  — BookForum

“The Lost is a sensitively written book that constantly asks itself the most difficult questions about history and memory.” — BookForum

“Daniel Mendelsohn has written a powerfully moving work of a “lost” family past. . . . A remarkable achievement.” — Joyce Carol Oates

“A stirring detective work, The Lost is … deepened by reflections on the inescapable part that chance plays in history.”  — J. M. Coetzee

“Extraordinary. . . . Mr. Mendelsohn, an evocative, ruminative writer, brings to life the vanished world not just of prewar Poland but also of his childhood and his extended family.” — William Grimes, The New York Times

“A masterpiece. . . . Daniel Mendelsohn is an astonishing writer. . . . This book for better or worse makes the Holocaust new again.” — The Jerusalem Post

“An excellent memoir. . . . Essentially a detective story, The Lost winds up describing far more than Mendelsohn’s relatives: It brings to life the struggle of an entire generation.” — People

“Moving. . . . Proves that there are limitless ways of looking at that most inexplicable of human moments.” — Entertainment Weekly

“A gripping detective story, a stirring epic, a tale of ghosts and dark marvels, a thrilling display of scholarship, a meditation on the unfathomable mystery of good and evil, a testimony to the enduring power of the ancient archetypes that haunt one Jewish family and the greater human family, The Lost is as complex and rich with meaning and story as the past it seeks to illuminate. A beautiful book, beautifully written.” — Michael Chabon 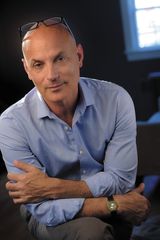 Daniel Mendelsohn a frequent contributor to The New York Review of Books and The New Yorker, is the author of the international bestseller The Lost: A Search for Six of Six Million. He teaches at Bard College.

Thank you for signing up to receive news about Daniel Mendelsohn.