The Journey of the Holocaust's Hidden Child Survivors

The Journey of the Holocaust's Hidden Child Survivors

Edgar Award-winning mystery novelist R. D. Rosen tells the story of the hidden children who survived the Holocaust through the lives of three girls hidden in three different countries—among the less than 10 percent of Jewish children in Europe to survive World War II—who went on to lead remarkable lives in New York City.

Only one in ten Jewish children in Europe survived the Holocaust, many in hiding. In Such Good Girls, R. D. Rosen tells the story of these survivors through the true experiences of three girls.

Sophie Turner-Zaretsky, who spent the war years believing she was an anti-Semitic Catholic schoolgirl, eventually became an esteemed radiation oncologist. Flora Hogman, protected by a succession of Christians, emerged from the war a lonely, lost orphan, but became a psychologist who pioneered the study of hidden child survivors. Unlike Anne Frank, Carla Lessing made it through the war concealed with her family in the home of Dutch strangers before becoming a psychotherapist and key player in the creation of an international organization of hidden child survivors.

In braiding the stories of three women who defied death by learning to be “such good girls,” Rosen examines a silent and silenced generation—the last living cohort of Holocaust survivors. He provides rich, memorable portraits of a handful of hunted children who, as adults, were determined to deny Hitler any more victories, and he recreates the extraordinary event that lured so many hidden child survivors out of their grown-up “hiding places” and finally brought them together.

“Rosen…tells the story of these women and the varied community of survivors with sensitivity and genuine affection.” - Library Journal

R.D. Rosen has performed an essential service to both memory and understanding. The three women at the heart of Such Good Girls have lived remarkable lives, and Rosen has limned them with both empathy and grace. - Daniel Orkent, author of Last Call: The Rise and Fall of Prohibition

“In the always harrowing and inspiring literature of Survival, R.D. Rosen’s Such Good Girls makes a poignant and well-told contribution...The ‘good girls’ of this riveting tale pulled off the improbable, which he conveys with talent, warmth, and great humanity.” - Thane Rosenbaum, author of The Golems of Gotham and Second Hand Smoke

“The first book that delves into the lesser-known aspect of children in hiding and the aftermath of the war years. Richly anecdotal, it reveals what it was like to become someone else-for a while-and then back again to whom one was meant to be.” - Myriam Abramowicz, co-director of As If It Were Yesterday

“R.D. Rosen has written about Jewish girls hidden in plain sight during the holocaust with such compassion and precision that his beautifully crafted words give a new voice to an unspeakable time. Such Good Girls is a story you will not forget.” - Betsy Carter, author of The Puzzle King

“R.D. Rosen proves a deft chronicler of the uncertainty, upheaval and turmoil experienced by his subjects…Most powerful of all, he makes us see how the Holocaust’s hidden children succeeded against the odds not just once, by surviving, but twice, through the resonant new lives they subsequently forged.” - Wall Street Journal

“I was completely hooked. A superb book. Rosen writes beautifully. I wish it could be read by everyone.” - Jeffrey Masson, author of When Elephants Weep

"There is a mystery at the heart of this First Steps—why we walk on two legs? The reader is hugely rewarded for the time spent with Jerry DeSilva in untangling the answers to that big and challenging question." - Inside Higher Ed 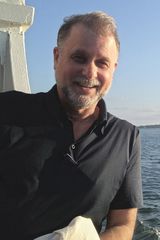 R. D. Rosen has written or coauthored numerous books spanning different genres—from an Edgar Award-winning mystery novel to narrative nonfiction, including Psychobabble (a word he coined in 1975) and A Buffalo in the House. He has appeared as a humorist and satirist on PBS, HBO, and NPR's All Things Considered.

Thank you for signing up to receive news about R. D. Rosen.