The Sublime and Elusive Elements That Expand Our World

The Sublime and Elusive Elements That Expand Our World

The New York Times bestselling author of Stuff Matters and Liquid Rules presents a fascinating guided tour of the secret life of gases: the strange, elusive, and fascinating substances that shape our world.

Gases are all around us—they fill our lungs, power our movement, create stars, and warm our atmosphere. Often invisible and sometimes odorless, these ubiquitous substances are also the least understood materials in our world, and always have been.

It wasn’t long ago that they were seen as the work of ancient spirits: the sudden closing of a door after a change in airflow signaled a ghost’s presence. Scientists and engineers have struggled with their own gaseous demons. The development of high-pressure steam power in the 18th century literally blew away some researchers, ushering in a new era for both safety regulations and mass transit. And carbon dioxide, that noxious byproduct of fossil fuel consumption and cow burps, gave rise to modern civilization. Its warming properties known for centuries, it now spells ruin for our fragile atmosphere.

In the perfect follow-up to his bestselling Stuff Matters and Liquid Rules, It’s a Gas chronicles ten gases that shaped human history. From hydrogen, carbon dioxide, and neon to laughing gas, steam, and even wind, the story of gases is the story of that tricky space where science and belief collide, and of the elusive limits of human understanding.

“Liquid Rules is an entertaining discussion of the various ways our lives are enriched by fluids. From the physics of ballpoint pens to the origin of jet-aircraft contrails, the book rewards the reader with fascinating facts and insights.”  — Wall Street Journal

“Written in a conversational tone, with all of the charm that genuine enthusiasm for the subject brings...[Miodownik] draws on his experience as an engineer and materials scientist and his skills as a science writer to make complex concepts accessible and, better still, intuitive...Liquid Rules is both entertaining and informative. . . At a time when technology, science, and public policy are often at odds, Miodownik adds to our understanding of the physical world with humor and sound science.”  — Science

“This book delivers exactly what it promises . . . A splendid soup of liquid-related science . . . It’s a treat. I lost count of the number of ‘but why?’ questions it answers . . . This is a winning and hugely readable book.”  — Sunday Times on Liquid Rules

“Miodownik writes with such knowledge, such enthusiasm, such a palpable love for his subject.” — Oliver Sacks on Stuff Matters

“Stuff Matters is about hidden wonders, the astonishing properties of materials we think boring, banal and unworthy of attention...It’s possible this science and these stories have been told elsewhere, but like the best chocolatiers, Miodownik gets the blend right.”  — New York Times Book Review 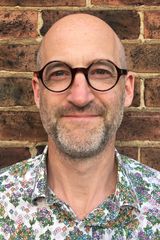 MARK MIODOWNIK is professor of materials and society at University College London, where he is also director of the Institute of Making. He is the author of the book Stuff Matters, a New York Times bestseller which won the National Academy of Sciences Communication Award for Books and the Royal Society Winton Prize. Mark writes regularly for the Guardian, hosts regular shows on the BBC, and was chosen as by the Times as one of the one hundred most influential scientists in the UK.

Thank you for signing up to receive news about Mark Miodownik.