From the bestselling author of The Pallbearers Club, A Head Full of Ghosts, and The Cabin at the End of the World, a gripping novel in which the mysterious disappearance of a teenage boy is only the beginning of unimaginable terrors.

Late one night, Elizabeth Sanderson receives the devastating news that every mother fears: her thirteen-year-old son, Tommy, has vanished without a trace.

The search isn’t yielding any answers, and Elizabeth and her young daughter, Kate, struggle to comprehend Tommy’s disappearance. Their feelings of helplessness and sorrow are compounded by anger and frustration: the police have uncovered no leads. The two friends who were with Tommy before he vanished may not be telling the whole truth about that night in Borderland State Park, when they were hanging out at a landmark the local teens have renamed Devil’s Rock.

Living in an all-too-real nightmare, Elizabeth is unprepared for the strange events that follow. She believes she sees Tommy’s ghost in her bedroom, while Kate and other residents claim to see a figure peering through their windows at night. Random pages torn from Tommy’s journal begin to mysteriously appear—entries that reveal an introverted teenager obsessed with the phantasmagoric; the loss of his father, killed in a drunk-driving accident a decade earlier; a folktale involving the devil and the Borderland woods; and a horrific incident that Tommy believed connects them all.

As the search grows more desperate, and the implications of what happened become more sinister, no one is prepared for the shocking truth about Tommy’s disappearance at Devil’s Rock.

“Even more head-spinning than its predecessor [A Head Full of Ghosts]—the kind of book that takes the simple premise of a lost child and twists it into a dizzying emotional vortex…The most powerful aspect of Disappearance, though, is its immediacy. Tremblay doesn’t shout or gesticulate. He whispers his tale, punctuating it with the ‘clicks and whirs’ of an air conditioner or the life-mocking ring of a child’s bicycle bell. His characters are rendered vividly and sensitively. The ambience is all shadows…immaculate storytelling.”  — NPR

“Tightly plotted and atmospheric…Tremblay uses concise prose and smooth storytelling to evoke raw emotion in this tale of love, loss, and terror…This stunning and tantalizing work of suggestive horror is sure to please admirers of Stephen King and Peter Straub.” — Publishers Weekly (starred review) on Disappearance at Devil’s Rock

“Tremblay does a masterful job of creating two worlds often at odds with each other—the world of a single mother struggling to stay afloat and the world of her young teenage son struggling to identify his role among peers. This tense, quick-moving story, part mystery and part folktale with a dash of police procedural, moves between points of view that offer tantalizing clues and moments of discomfort. The result is a satisfying piece of fiction that shifts genres underneath the reader.”  — Booklist (starred review) on Disappearance at Devil’s Rock

“Disappearance at Devil’s Rock is a true and powerful mystery novel, full of twists and horrors that will keep even the most jaded genre reader silently turning its pages late into the night.” — New York Journal of Books

“Crackling with dark energy and postmodern wit...[this] superb novel evokes the very best in the tradition—from Shirley Jackson to Mark Z. Danielewski and Marisha Pessl—while also feeling fresh and utterly new. Deeply funny and intensely terrifying, it’s a sensory rollercoaster and not to be missed.” — Megan Abbott, author of The Fever and Dare Me

“Paul Tremblay is an astonishingly talented writer, but even better, he’s twisted, and fun. A Head Full of Ghosts is mind-bending—scary, sad, sweet, funny, sick. ... . Terrifying, hilarious, smart, and satisfying.” — Stewart O'Nan, author of The Speed Queen, The Night Country, and A Prayer for the Dying

“Tremblay expertly ratchets up the suspense until the tension is almost at its breaking point.” — Kirkus Reviews

“The novel is stylishly written and well-conceived.” — Booklist

“Gripping and truly scary, this book feels of the moment in a way few thrillers do.” — B&N Reads

“A mind-bending tale of psychological horror is unleashed, raising disturbing questions about memory and reality, science and religion, and the very nature of evil.” — Buzzfeed

“…progressively gripping and suspenseful — (Tremblay’s) ultimate, bloodcurdling revelation is as sickeningly satisfying as it is masterful.” — NPR Books

“Loved it. Highly recommended for anyone who loves engrossing literary horror-undertones of The House of Leaves (but far more accessible) and The Exorcist, and redolent of Shirley Jackson.” — Ellen Datlow

“Dark, brilliant, and impossible to predict, [this] is more than a perfect horror story. It’s a smart and savage look at American culture in all its madness, and the price girls are forced to pay by a society obsessed with spectacle and sin.” — Cara Hoffman, author of So Much Pretty and Be Safe I Love You

“A Head Full of Ghosts doesn’t end just because you close the book. Some horror, it bleeds through the pages, gets onto your hands, stays with you. You’ll be thinking about this one long after you’ve read it.” — Stephen Graham Jones, author of Demon Theory and Ledfeather

“A genuinely scary, post-modern homage to classic horror that invokes Stanley Kubrik and Shirley Jackson in equal measure, but also manages to innovate on nearly every page. [It] is unlike any horror novel you’ve read, and yet hauntingly, frighteningly familiar.” — Sara Gran, author of Claire DeWitt and the City of the Dead and Come Closer

“Part psychological thriller, part demonic possession horror, this book is a juicy, fast-paced genre bombshell that just happens to be one of the smartest novels you’ll read this year.” — The Life Sentence

“A Head Full of Ghosts is one of the best novels released this year. ...Paul Tremblay confirms what we already knew: he’s one of the greatest horror writers today.” — This is Horror (UK)

“By turns horrifying, very funny, melancholy, ironic and, with each page, dazzlingly original, A Head Full of Ghosts is a one-book rocket ride through contemporary society where, if Evil doesn’t actually exist in a Biblical sense, we’re just the folks to invent it on our own.” — The Day newspaper

“This will easily be remembered as one of the most powerfully disquieting and deeply unsettling novels of the year, and may mark something of a turning point in the mainstream horror genre.” — Shock Totem 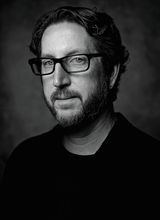 Paul Tremblay has won the Bram Stoker, British Fantasy, and Massachusetts Book awards and is the author of Growing Things, The Cabin at the End of the World, Disappearance at Devil’s Rock, A Head Full of Ghosts, and the crime novels The Little Sleep and No Sleep Till Wonderland. His essays and short fiction have appeared in the Los Angeles Times, Entertainment Weekly online, and numerous year’s-best anthologies. He has a master’s degree in mathematics and lives outside Boston with his family.

Thank you for signing up to receive news about Paul Tremblay.