Power, Complicity, and a Call for Change in Hollywood

Power, Complicity, and a Call for Change in Hollywood

An exposé of patterns of harassment and bias in Hollywood, the grassroots reforms under way, and the labor and activist revolutions that recent scandals have ignited.

It is never just One Bad Man.

Abuse and exploitation of workers is baked into the very foundations of the entertainment industry. To break the cycle and make change that sticks, it’s important to stop looking at headline-making stories as individual events. Instead, one must look closely at the bigger picture, to see how abusers are created, fed, rewarded, allowed to persist, and, with the right tools, how they can be excised.

In Burn It Down, veteran reporter Maureen Ryan does just that. She draws on decades of experience to connect the dots and illuminate the deeper forces sustaining Hollywood’s corrosive culture. Fresh reporting sheds light on problematic situations at companies like Lucasfilm and shows like Saturday Night Live, The Goldbergs, Lost, Sleepy Hollow, Curb Your Enthusiasm and more. Interviews with actors and famous creatives like Evan Rachel Wood, Harold Perrineau, Damon Lindelof, and Orlando Jones abound. Ryan dismantles, one by one, the myths that the entertainment industry promotes about itself, which have allowed abusers to thrive and the industry to avoid accountability—myths about Hollywood as a meritocracy, what it takes to be creative, the value of human dignity, and more.

Weaving together insights from industry insiders, historical context, and pop-culture analysis, Burn It Down paints a groundbreaking and urgently necessary portrait of what’s gone wrong in the entertainment world—and how we can fix it.

"This book is urgent and necessary, and I am excited to see Mo Ryan bring it into the world. So many of the books about misconduct and abuse in the entertainment industry focus on One Important Man, and we know the problems are deeper and wider than that at every level. An examination of the systems and traditions that enable abuse and prop up abusers, helping them fail upwards and ensuring there will be a bottomless churn of vulnerable workers for them to exploit is so needed right now. Mo is the one I trust to write this important book." — Erin Keane, Editor-in-Chief of Salon and author of Runaway

"Mo Ryan is a brilliant stylist and a dogged, clear-eyed reporter. She's become legendary for her miles-deep exposés of Hollywood abuse, toxicity and bullying—journalism that has helped shake up a broken industry. But she's also an ideal guide to understanding the big picture on these issues including recent efforts to make genuine change. A crucial voice in a chaotic time." — Emily Nussbaum, Pulitzer Prize-winning critic for The New Yorker and author of I Like to Watch: Arguing My Way Through the TV Revolution

"Maureen Ryan has done much of the heavy lifting in helping to uncover not just the ugliness of the behavior of high-profile individuals, but the mundane abuses common in the broader television landscape. She’s a tenacious and meticulous reporter, a sharp and passionate writer, and an advocate for a fairer and better industry. There’s a reason a lot of network personnel with a lot they’re trying to keep in the dark hate nothing more than to see Mo coming with a flashlight and a pen." — Linda Holmes, New York Times bestselling author of Evvie Drake Starts Over and host of NPR’s Pop Culture Happy Hour

"I have been reading Mo Ryan for a long time: she is a rigorous thinker and a lovely writer and does terrific and necessary work to trace the places where entertainment and injustice intertwine with profit and abuse." — Rebecca Traister, New York Times bestselling author of Good and Mad and All the Single Ladies

"Mo Ryan is not only a keen critic with a fair and far-reaching eye. She is also a leader in dismantling systems of oppression and abuse in Hollywood. Her reporting has single handedly brought consequences for abusers in positions of power. I am continually inspired and grateful for her work in my industry. She makes the entertainment world safer." — Felicia Day, New York Times bestselling author of You’re Never Weird on the Internet and Embrace Your Weird

"As a journalist, Mo Ryan saw the need for #MeToo coming years before it went viral. But that means she also knows that there is much more work to do. Many more painful truths about show business. And more skeletons in closets that need to be dragged out into the light. Mo is fierce, funny, unbossed, and unafraid." — W. Kamau Bell, author of The Awkward Thoughts of W. Kamau Bell and host of the Emmy Award nominated CNN docu-series United Shades of America

"Mo Ryan is the kind of writer you look to for truth…. She is uniquely able to see things from many different angles and perspectives and because she has made it her mission not to just simply summarize or critique, but to illuminate how media deeply affects and changes us.... Reading what she thinks of something always makes me think about it in a deeper way…. I can’t wait to read this book and her observations on all that she’s learned. I know I will learn a lot from it too." — Natalie Morales, actress and director of the films Plan B and Language Lessons

"Mo Ryan is a necessary agent in questioning the status quo, and Burn It Down masterfully takes on Hollywood power structures that need to be reckoned with and changed." — Ira Madison III, co-host of the Crooked Media podcast Keep It and author of the forthcoming essay collection Pure Innocent Fun 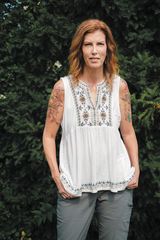 Thank you for signing up to receive news about Maureen Ryan.