My Battle to Take Down the Notorious OneCoin Cryptoqueen

My Battle to Take Down the Notorious OneCoin Cryptoqueen

The astonishing true story of the Scottish coal miner’s daughter who took on the Mafia-endorsed creators of the world’s biggest financial fraud and helped the FBI to convict them—soon to be a major motion picture.

A teenaged mother, today a young grandmother, Jen McAdam was a victim of the OneCoin global crypto-currency fraud, which stole around $27 billion from ordinary people around the world. Unlike Madoff or Enron, who relieved the world’s wealthiest investors of their cash, the exploiting genius of the OneCoin scam was targeting the poorest people in the world, the “unbanked”—those who struggled to live or get mainstream banking support. The fraudsters believed their victims couldn’t and wouldn’t fight back. They didn’t reckon on Jen McAdam, a modern Erin Brockovich.

Jen’s father left her £10,000 when he died: his savings from living a careful life in a small Scottish mining town. Jen wanted a safe investment for this money to fund a better life for her and her son and his family.. She was digitally savvy, and she had heard of people making fortunes with Bitcoin. When she saw the promotional material for OneCoin—the founder Dr Ruja Ignatova featured in the Economist, videos of celebrity events, gushing video testimonials of people, just like her, who had changed their lives, she was entranced.

Only months later, she realized she would never see her money again.

Jen was the only victim worldwide to fight back. Despite terrifying attempts to shut down her and her growing support groups, she fought tirelessly for justice for herself, her family and friends, and the millions around the world who have lost everything, in some cases even their lives. This is a true David and Goliath story, to give us all a message of hope about the power we as individuals can have, even when things seem hopeless. 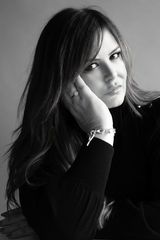 Jennifer McAdam had a long career in the marketing industry before launching her own consultancy working with IT companies throughout Scotland and abroad. Illness forced here to cut back on work, but she remains active in the industry. Since 2016 she has worked full-time, even from her sickbed, through her online Victims’ Support Group to fight for retribution for the OneCoin fraud and to see the perpetrators brought to justice.

Thank you for signing up to receive news about Jennifer McAdam.