“A con artist story, a pop-feminist caper, a fashionable romp . . . Counterfeit is an entertaining, luxurious read—but beneath its glitz and flash, it is also a shrewd deconstruction of the American dream and the myth of the model minority. . . . Chen is up to something innovative and subversive here." — Camille Perri, NEW YORK TIMES BOOK REVIEW

For fans of Hustlers and How to Get Filthy Rich in Rising Asia, the story of two Asian American women who band together to grow a counterfeit handbag scheme into a global enterprise—an incisive and glittering blend of fashion, crime, and friendship from the author of Bury What We Cannot Take and Soy Sauce for Beginners.

Money can’t buy happiness… but it can buy a decent fake.

Ava Wong has always played it safe. As a strait-laced, rule-abiding Chinese American lawyer with a successful surgeon as a husband, a young son, and a beautiful home—she’s built the perfect life. But beneath this façade, Ava’s world is crumbling: her marriage is falling apart, her expensive law degree hasn’t been used in years, and her toddler’s tantrums are pushing her to the breaking point.

Enter Winnie Fang, Ava’s enigmatic college roommate from Mainland China, who abruptly dropped out under mysterious circumstances. Now, twenty years later, Winnie is looking to reconnect with her old friend. But the shy, awkward girl Ava once knew has been replaced with a confident woman of the world, dripping in luxury goods, including a coveted Birkin in classic orange. The secret to her success? Winnie has developed an ingenious counterfeit scheme that involves importing near-exact replicas of luxury handbags and now she needs someone with a U.S. passport to help manage her business—someone who’d never be suspected of wrongdoing, someone like Ava. But when their spectacular success is threatened and Winnie vanishes once again, Ava is left to face the consequences.

Swift, surprising, and sharply comic, Counterfeit is a stylish and feminist caper with a strong point of view and an axe to grind. Peering behind the curtain of the upscale designer storefronts and the Chinese factories where luxury goods are produced, Kirstin Chen interrogates the myth of the model minority through two unforgettable women determined to demand more from life.

"If you appreciate a good caper, you’ll want to pick up Kirstin Chen’s novel . . . Fast-paced and fun, with smart commentary on the cultural differences between Asia and America." — TIME

“Propulsive and captivating . . . A provocative story of fashion, friendship, and fakes (in more ways than one).” — VOGUE

"A con artist story, a pop-feminist caper, a fashionable romp. Fun! Pass the popcorn. Except nothing in this novel is what it seems. Make no mistake, Counterfeit is an entertaining, luxurious read—but beneath its glitz and flash, it is also a shrewd deconstruction of the American dream and the myth of the model minority. . . . Readers love a twist and I won’t spoil this one by revealing too much, but Chen is up to something innovative and subversive here. She uses the device to flip Asian and Asian American stereotypes inside out and upside down." — Camille Perri, New York Times Book Review

"A startling, gleeful look at the American Dream and what counts as real in a world obsessed with image, this caper story follows two very different Chinese American women as they build a fake fashion empire that then threatens to come crashing down. Chen’s use of story structure is masterful, as are her complicated, compelling characters." — Grace D. Li, Washington Post

"If you appreciate a good caper, you’ll want to pick up Kirstin Chen’s novel about two Asian American women who turn a counterfeit handbag scheme into a big business. The book is written as a confession, which helps readers get to know protagonists Ava and Winnie, and how their lives detoured toward crime. Counterfeit is fast-paced and fun, with smart commentary on the cultural differences between Asia and America." — TIME magazine, Best Books of Summer 2022

“Propulsive and captivating . . . A provocative story of fashion, friendship, and fakes (in more ways than one), with characters that both subvert and capitalize on the model-minority myth. No surprise that the sly feminist caper was the subject of a fierce eight-way bidding war for TV rights.” — Vogue, The Best Books of 2022

"College roommates Ava Wong and Winnie Fang were never close—but now they are literally partners in crime, with a designer handbag scam as brazen as it is foolproof. Clever, catty fun." — People, Best Books of Summer 2022

"Centered on two women who partner on a global counterfeit luxury handbag business. I always wish there was more fashion in novels . . . My fun read of early summer!”  — Kathy Wang, Entertainment Weekly

“This one's as flashy as a designer store window, and just as enticing.” — Good Housekeeping

"In this crime drama, a risk-averse former lawyer joins an elaborate fakebag scheme to finally get some thrills." — Cosmopolitan

"Engrossing . . . . There is something particularly joyful and delicious right now about reading a novel centered around a feminist caper. This novel is a lot of fun, but it also asks a lot of questions about what we covet and why." — Roxane Gay

"In this clever caper (with TV rights already optioned), two Asian American women start a lucrative business selling counterfeit luxury handbags. As the tale is told from each character’s point of view, you’ll wonder which version is authentic and which is a fake." — AARP, Fun Summer Books

“Chen’s third novel is sly and subversive, an examination of motherhood and an incisive look at culture and class . . . A readalike for Amelia Morris’s Wildcat, with a touch of crime.” — Booklist (starred review)

“This entertaining novel about two former roommates who run a counterfeit luxury handbag scam has it all!” — Buzzfeed

"In this delicious romp about a counterfeit bag scheme, you’ll get Hustlers meets The Bling Ring meets Molly’s Game. . . . This one is so fast-paced and bingeable that it’s already been scooped up to be turned into a TV show." — theSkimm, Buzzy Beach Reads of 2022

"Chen has written a fast-paced, character-forward story of two very different Asian American women seemingly inadvertently falling into a collaboration to build a global counterfeit handbag empire . . . Ingeniously constructed, this cinematic novel of friendship, ambition, and wanting more out of life will leave you guessing until the end.” — Oprah Daily, 10 Must-Read Books for AAPI Heritage Month 2022

"How good is Counterfeit by Kirstin Chen? The story of two Asian American women's wildly successful counterfeit handbag scheme has already been optioned for television." — Popsugar, The Best New Book Releases So Far

“Counterfeit is decadent and delicious. The sparkling storyline seduces with its compelling twists and turns even as Kirstin Chen deftly interrogates issues of race, identity, wealth and consumerism. A true delight for mind and heart from beginning to end.” — Jean Kwok, New York Times bestselling author of Searching for Sylvie Lee

"Sly and thoroughly compelling, Kirstin Chen's Counterfeit illuminates the world of fake designer handbags, as ruthless adventuress Winnie and her upstanding former college roommate Ava build an illicit business out of bravado and lies. Nothing is as it seems, and Chen's ingenious plot will keep you breathless to the last page." — Claire Messud, New York Times bestselling author of The Burning Girl

"Kirstin Chen keeps readers on the edge of their seats as she weaves an addictive tale about the high/low world of counterfeit luxury handbags, spanning San Francisco to Guangzhou. A glittering, provocative read." — Janice Y. K. Lee, New York Times bestselling author of The Expatriates

“Counterfeit is as stylish and smart as its mastermind heroines. Kirstin Chen writes, with humor and verve, prose that's as addictive as a luxury handbag habit, and psychologically rich characters, too. Come for the con, stay for the insights into identity and self discovery, and the ever-elusive American dream.” — Rachel Khong, award-winning author of Goodbye, Vitamin

"Trust us — Counterfeit is riveting, and a perfect beach read." — Ask.com, The Most Talked-About and Best Books of 2022

"Two Asian American women come together to turn a counterfeit handbag scheme into a global enterprise in this razor-sharp and witty take on mixing fashion and female friendships from the author of Bury What We Cannot Take. The story becomes a caper when one of them disappears and the other is left to deal with the consequences when their empire begins to crumble. Did we mention there was a fierce bidding war between eight studios for the TV rights to Counterfeit, with Sony Pictures Television's ultimately landing the real deal?" — E! News, 16 Books to Add to Your Beach Bag This June

“Think Hustlers with a little bit of Good Girls throw in for good measure.” — Literary Hub

"Longstanding friendship, fake luxury, and elaborate theft . . . and from a writer whose previous novels have been utterly captivating—yes, please.” — Electric Literature, 62 Books By Women of Color to Read in 2022

“[Chen] comes up with a winner in this clever, sharp, and slyly funny novel about a long con. . . . A delightfully different caper novel with a Gone Girl–style plot twist.” — Kirkus

“It’s a breezy read with unexpected twists, carried along by Ava’s seemingly heartfelt confession to a police detective.”  — Bookpage

“Chen spins a clever tale offering two sides of a story involving a complicated friendship and knockoff handbags . . . The story is further deepened by the author’s sharp, convincing details of the fashion industry and its shadow market, which lends this tale of fakes the tang of authenticity. Readers will be left guessing at the truth until the last page.” — Publishers Weekly

“All the “Best Beach Read of 2022? lists are giving shout outs to this snazzy page-turner about two Asian-American women who build an international criminal operation selling knockoff handbags.” — Philadelphia Inquirer 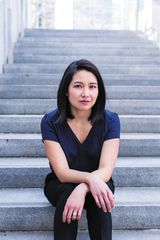 Kirstin Chen is the New York Times bestselling author of Counterfeit, Soy Sauce for Beginners and Bury What We Cannot Take. Born and raised in Singapore, she currently lives in New York City.

Thank you for signing up to receive news about Kirstin Chen.