In this exquisite biography, an art historian and critic captures a singular moment of community and creativity in mid-twentieth-century New York City, bringing to life a group of struggling artists and the place they all called home, an obscure little street at the lower tip of Manhattan, Coenties Slip.

For just over a decade, from 1956 to 1967, a collection of dilapidated former sail-making warehouses clustered at the lower edge of Manhattan became the quiet epicenter of the art world. Coenties Slip, a dead-end street near the water, was home to a circle of wildly talented and varied artists that included Robert Indiana, Ellsworth Kelly, Agnes Martin, James Rosenquist, Delphine Seyrig, Lenore Tawney, and Jack Youngerman. As friends and inspirations to one another, they created a unique community for unbridled creative expression and experimentation, and the works they made at the Slip would go on to change the course of American art.

Now, for the first time, Prudence Peiffer pays homage to these artists and the unsung impact their work had on the direction of late twentieth-century art and film. This remarkable biography, as transformative as the artists it illuminates, questions the very concept of a “group” or “movement,” as it spotlights the Slip’s eclectic mix of gender and sexual orientation, abstraction and Pop, experimental film, painting, and sculpture, assemblage and textile works. Brought together not by the tenets of composition or technique, nor by philosophy or politics, the artists cultivated a scene at the Slip defined by a singular spirit of community and place. They drew lasting inspiration from one another, but perhaps even more from where they called home, and the need to preserve the solitude its geography fostered. Despite Coenties Slip’s obscurity, the entire history of Manhattan was inscribed into its cobblestones—one of the first streets and central markets of the new colony, built by enslaved people, with revolutionary meetings at the tavern just down Pearl Street; named by Herman Melville in Moby Dick and site of the boom and bust of the city’s maritime industry; and, in the artist’s own time, a development battleground for Jane Jacobs and Robert Moses. The Slip’s history is entwined with that of the artists and their art—eclectic and varied work that was made from the wreckage of the city’s many former lives.

An ambitious multifaceted biographical portrait and riveting historical account, The Slip explores the role of place in creativity—how we are shaped by our environment, and how it in turn shapes our work.

The Slip is illustrated with 20 photos in two 8-page inserts. 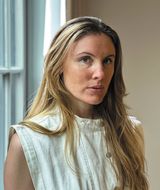 Thank you for signing up to receive news about Prudence Peiffer.