The Grit & Glamour of an Icon

The Grit & Glamour of an Icon

From the #1 New York Times bestselling author of The Residence and First Women, the first ever authorized biography of the most famous movie star of the twentieth century, Elizabeth Taylor.

No celebrity rivals Elizabeth Taylor’s glamour and guts or her level of fame. She was the last major star to come out of the old Hollywood studio system and she is a legend known for her beauty and her magnetic screen presence in a career that spanned most of the twentieth century and nearly sixty films. But her private life was even more compelling than her Oscar-winning on-screen performances. During her seventy-nine years of rapid-fire love and loss she was married eight times to seven different men. Above all, she was a survivor—by the time she was twenty-six she was twice divorced and once widowed. Her life was a soap opera that ended in a deeply meaningful way when she became the first major celebrity activist to lead the fight against HIV/AIDS. A co-founder of amfAR, she raised more than $100 million for research and patient care. She was also a shrewd businesswoman who made a fortune as the first celebrity perfumer who always demanded to be paid what she was worth.

In the first ever authorized biography of the Hollywood icon, Kate Andersen Brower reveals the world through Elizabeth’s eyes. Brower uses Elizabeth’s unpublished letters, diary entries, and off-the-record interview transcripts as well as interviews with 250 of her closest friends and family to tell the full, unvarnished story of her remarkable career and her explosive private life that made headlines worldwide. Elizabeth Taylor captures this intelligent, empathetic, tenacious, volatile, and complex woman as never before, from her rise to massive fame at age twelve in National Velvet to becoming the first to negotiate a million-dollar salary for a film, from her eight marriages and enduring love affair with Richard Burton to her lifelong battle with addiction and her courageous efforts as an AIDS activist.

Here is a fascinating and complete portrait worthy of the legendary star and her legacy.

“A dazzling portrait of an incredible woman. Elizabeth's life was more captivating than any film could ever be." — Demi Moore

"Brower’s book takes the reader into the private world of the most famous celebrity of the 20th century. Elizabeth’s heart, mind, and passion come vividly alive on each page. We see her as a woman who struggled and ultimately survived to rewrite the playbook on celebrity and power. I never wanted it to end!" — Brooke Shields

“Many should be inspired by all that Elizabeth accomplished as an HIV and AIDS activist. Brower’s book took me back to the early days when Elizabeth fought so hard against the stigma surrounding people living with HIV and AIDS. She lived by the credo, ‘To whom much is given, much is required.’ Elizabeth was not perfect, but she always tried to improve and be better. Her true nature is revealed here in these pages and her life story deserves to be told in a moving and transparent way.” — Magic Johnson

"Brower’s behind-the-curtain look at the most private thoughts of such an enormous cultural icon is a true page turner! I feel like I know what made Elizabeth tick after reading it." — Andy Cohen

“The last great movie star of the Hollywood studio system, the legendary Elizabeth Taylor was as complex and captivating as any role she ever played. Kate Andersen Brower vividly captures the icon throughout her eventful but tempestuous life, as an accomplished actress, much-married wife, devoted mother, loyal friend, savvy businesswoman, compassionate humanitarian, and international celebrity.” — Mark K. Updegrove, president & CEO of the LBJ Foundation and author of Incomparable Grace: JFK in the Presidency

"Magnetic and mercurial, ferocious and funny, sensual yet maternal, with explosive energy and a luminous purity of profound emotion, Elizabeth Taylor was a brilliant virtuoso of the camera and the greatest screen actress in Hollywood history." — Camille Paglia, author of Sexual Personae

“Brower does not deny partisan politics, but she finds an overarching spirit of camaraderie among those who’ve borne the office’s burdens . . . Insights into presidential life beyond the rancor of everyday politics will make this a very popular read for the general public.” — Booklist (starred review) on TEAM OF FIVE

“Brower is quickly becoming a brand-name Washington writer because of her ability to deliver juicy tidbits and insider information while steering her books toward a mainstream audience without sacrificing historical credibility.” — Christian Science Monitor on TEAM OF FIVE

“Illuminating and anecdote-laden . . . Presidential history buffs will enjoy this respectful peek into one of America’s most exclusive clubs.”
— Publishers Weekly on TEAM OF FIVE

“Combining fascinating inside stories with astute political insights, First in Line fills a long-missing hole in American history. We learn here how men from Richard Nixon to Mike Pence have played their sometimes essential, sometimes useless roles in the prestigious but peculiar job of Vice President.” — Cokie Roberts, author of Ladies of Liberty, on FIRST IN LINE

“An intimate, compulsively readable account of the dynamics that have shaped—and sometimes destroyed—relations at the top of the American political hierarchy.... [and] a valuable addition to the literature of the modern presidency.” — Wall Street Journal on FIRST IN LINE

“A revealing look at America’s first ladies, shining a spotlight on both their friendships and feuds.” — Today on FIRST WOMEN

“A highly readable . . . deep look at the women who help and sometimes overshadow their powerful husbands.” — USA Today on FIRST WOMEN

“The tell-all The Residence, featuring intimate anecdotes collected from past and current White House staff members, is absolutely delicious.” — Washington Post on THE RESIDENCE

“In this first authorized biography of the last of the great Hollywood studio-system stars, Brower mines previously unpublished interviews, personal letters, and diary entries as well as input from hundreds of friends and family to offer a comprehensive and intimate biography of a true icon…Taylor's tumultuous life unfolds in Brower's portrait like one of her own epic screen adventures. A must-read for Taylor’s legions of fans and all who savor well-told and well-documented tales of Old Hollywood.” — Booklist

“There is perhaps no bigger (or more misunderstood) star than Elizabeth Taylor, who at last gets an authorized biography courtesy of Kate Andersen Brower and the Taylor estate. With access to Taylor's unpublished letters, diary entries, and off-the-record interview transcripts, as well as her own interviews with 250 of Taylor's closest friends and family, readers will get the most personal look at Taylor ever put to paper.” — Entertainment Weekly

"Brower convincingly depicts Taylor as a complex woman whose glamour, even today, is 'intoxicating.' The result is a mesmerizing appreciation of a legendary star." — Publishers Weekly 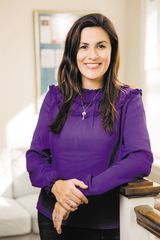