The Boy Who Drew Auschwitz

A Powerful True Story of Hope and Survival

The Boy Who Drew Auschwitz

A Powerful True Story of Hope and Survival

"A rare living testimony through the eyes of a child."—The History Channel

Already a staple in European classrooms, The Boy Who Drew Auschwitz: A Powerful True Story of Hope and Survival by Thomas Geve is now available in the United States.

In June 1943, after several years of hardship and persecution in Berlin, 13-year-old Thomas Geve and his mother were deported to Auschwitz-Birkenau. Separated upon arrival from his mother, Thomas still a child—a fact hidden by his tall stature from the SS officers—was forced to fend for himself in the men’s camp of Auschwitz I. As he struggled to main­tain his humanity, Thomas developed sur­vival strate­gies, formed friendships, and learned whom he could trust.

Unlike most prisoners, as a bricklayer, Thomas moved around, worked in and saw different places in and out of the camp, met other prisoners and civilians—all of which gave him a broader view and useful connections. Having survived for 18 months, Thomas became a camp veteran—surpassing the average prisoner’s life expectancy of 3 to 6 months.

Thomas began drawing on scraps of paper in Auschwitz. These drawings were lost. However, in the weeks following his liberation, at age 15, while still in Buchenwald and too weak to leave, he resumed his project with col­ored pen­cils and a set of water­col­ors, the gift of an Amer­i­can sol­dier. He made drawings that depict not only infamous scenes, but also the day-to-day events of life in the camps—what they ate, their work, their routines—alongside moments of humanity, support, and friendship.

Together, the illustrations in The Boy Who Drew Auschwitz create a meticulous record of life in the camps. Thomas’s observant eye and his attention to detail have made his drawings valued by historians for being highly informative, reliable, and accurate. Thomas’s written testimony followed his drawings a few years later, while his memory was fresh and the scenes and dialogues were still vivid in his mind. This newly revised edition of The Boy Who Drew Auschwitz contains Thomas’s original testimony, 56 of his drawings, original photographs, and maps.

“We learn of the power of friendship and the sacrifices made to help each other survive.... Aspects of his story are positive in ways that are new and insightful.... Seventy-five years later there is a raw and authentic ring to Geve’s descriptions only possible in the immediate aftermath. He talks about victims’ groups such as the Roma and political prisoners with great clarity. His description of the Death March, and helping the most needy while walking with blistering and aching feet, shows his sense of community and generosity even in the direst of circumstances.”—Stephen Smith, from the foreword

“In com­bin­ing a child’s response to the hell he encoun­tered in Auschwitz, Gross Rosen, and Buchen­wald with the wis­dom of an old­er man, Geve offers read­ers a spe­cif­ic under­stand­ing of suf­fer­ing and sur­vival dur­ing the Shoah.”—Emily Schneider, Jewish Book Council 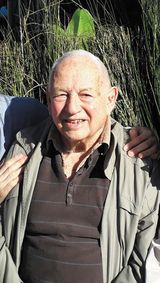 Thomas Geve was born in Germany in October 1929. As Nazi persecution intensified, the family faced danger and hardship and moved around often. Thomas’s father fled to England, schools for Jewish children closed, and Thomas became a cemetery worker in Berlin. Eventually, he and his mother were deported to Auschwitz-Birkenau in June 1943. Against all odds, Thomas survived 22 months of three concentration camps and was liberated in April 1945. He was never to see his mother again. After a period of recuperation in Switzerland, Thomas and his father were reunited in London, where he completed his studies and graduated as a building engineer. In 1950 Thomas settled in Israel, where he raised a family and now lives peacefully in retirement.

Thank you for signing up to receive news about Thomas Geve.