The Kingdom of Prep

The Inside Story of the Rise and (Near) Fall of J.Crew

The Kingdom of Prep

The Inside Story of the Rise and (Near) Fall of J.Crew

One of Vogue's most anticipated books of 2023.

A quintessentially American fashion narrative about the rise and fall of the first lifestyle brand, J.Crew, and what the company’s fate means for the shifting landscape of the retail industry.

Once upon a time, a no-frills J.Crew rollneck sweater held an almost mystical power—or at least it felt that way. The story of J.Crew is the story of the original “lifestyle brand,” whose evolution charts a sea change in the way we dress, the way we shop, and who we aspire to be over the past four decades—all told through iconic clothes and the most riveting characters imaginable.

In The Kingdom of Prep, seasoned fashion journalist Maggie Bullock tells J.Crew’s epic story for the first time, bringing to life the deliciously idiosyncratic people who built a beloved brand, unpacking the complex legacy of prep—a subculture born on the 1920s campuses of the Ivy League—and how one brand rose to epitomize “American” style in two very different golden eras, and also eventually embodied the “retail apocalypse” that rocked the global fashion industry and left hollowed-out malls across the country.

In a juicy business narrative rich with humor and insight, Bullock combines the colorful characters of The Devil Wears Prada, the business insight of Deluxe, and the nostalgia factor of True Prep, to chart J.Crew’s origin story, its Obama-era heyday, and its brush-with-death decline through the stories of the mercurial characters who helmed the company. There is founder Arthur Cinader, who set out to sell the Ralph Lauren look for half the price, and his daughter Emily, who turned J.Crew into a new campus uniform, and then a temple to ‘90s minimalism. Then came ex-Gap CEO Mickey Drexler—the most renowned (and controversial) retailer of his generation—who took J.Crew to a never-before-seen peak, only to contribute to its financial disaster, and the brilliant designer Jenna Lyons, who rose from the anonymous ranks of a catalogue company to become a star in her own right, but burned so bright she left J.Crew in her shadow.

Through extensive interviews with more than 100 J.Crew insiders and top industry experts, Bullock crafts an impossible-to-put-down, neon-glitter-sprinkled tale that traces the trajectory of American style, invites us into the inner sanctum of fashion’s most bold-faced names, and weaves together the threads of style, finance, and culture like no other brand’s story in our lifetime.

"Maggie Bullock's very soul wears a J.Crew sweater. The Kingdom of Prep is the maddest, wildest, sharpest book about fashion of the past decade - it dissects the industry with warm wit and devastating precision." — E.Jean Carroll, author of What Do We Need Men For? A Modest Proposal

"The Kingdom of Prep is a fashion-biz chronicle that reads like a page-turner. But it's also the story of American style writ large - and how what we wear reflects our national character. You'll never look at a rollneck sweater in the same way again." — Véronique Hyland, author of Dress Code: Unlocking Fashion from the New Look to Millennial Pink

"The Kingdom of Prep dives deep into the allure of an empire originally built on broken-in basics and fireside photo shoots, offering a guided tour through catalogue booms, billion-dollar investment deals, models, fashion shows, and true style stardom in the Mickey Drexler and Jenna Lyons era. In this entertaining, behind-the-scenes insider account, Maggie Bullock shows us how J.Crew captured - then lost, then captured again - the zeitgeist of American privilege and membership to a club that defies definition, yet is ever present in our psyche." — Marisa Meltzer, author of This Is Big: How the Founder of Weight Watchers Changed the World 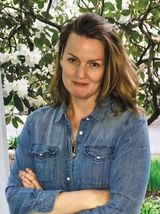 Thank you for signing up to receive news about Maggie Bullock.