A riveting behind-the-scenes account of the new stars of the far right—and how they’ve partnered with billionaire donors, idealogues, and political insiders to build the most powerful youth movement the American right has ever seen

In the wake of the Obama presidency, a group of young charismatic conservatives catapulted onto the American political and cultural scenes, eager to thwart nationwide pushes for greater equity and inclusion. They dreamed of a cultural revolution—online and off—that would offer a forceful alternative to the progressive politics that were dominating American college campuses.

In Raising Them Right, a gripping, character-driven read and investigative tour de force, Kyle Spencer chronicles the people and organizations working to lure millions of unsuspecting young American voters into the far-right fold—revealing their highly successful efforts to harness social media in alarming ways and capitalize on the democratization of celebrity culture.

These power-hungry new faces may look and sound like antiestablishment renegades, but they are actually part of a tightly organized and heavily funded ultraconservative initiative to transform American youth culture and popularize fringe ideas. There is Charlie Kirk, the swashbuckling Trump insider and founder of the right-wing youth activist group Turning Point USA, who dreams of taking back the country’s soul from weak-kneed liberals and becoming a national powerbroker in his own right. There is the acid-tongued Candace Owens, a Black ultraconservative talk-show host and Fox News regular who is seeking to bring Black America to the GOP and her own celebritydom into the national forefront. And there is the young, rough-and-tumble libertarian Cliff Maloney, who built the Koch-affiliated organization Young Americans for Liberty into a political force to be reckoned with, while solidifying his own power and pull inside conservative circles.

Chock-full of original reporting and unprecedented access, Raising Them Right is a striking prism through which to view the extraordinary shifts that have taken place in the American political sphere over the last decade. It establishes Kyle Spencer as the premier authority on a new generation of young conservative communicators who are merging politics and pop culture, social media and social lives, to bring cruel economic philosophies, skeletal government, and dangerous antidemocratic ideals into the mainstream. Theirs is a crusade that is just beginning.

“There are very few books that I call ‘must read.’ This is one of them. In Raising Them Right, Kyle Spencer exhaustively details how the far right is trying to captivate and hold America's youth. Her expose will startle you, surprise you, and frighten you. And I say all that as someone who comes from the far right, is still of the right in my politics, and who has spent much time myself the past ten years speaking to and motivating young conservatives. I don't anymore. Because these young people are being radicalized. Kyle makes that clear in this book. Read it. Your country needs you to.” — Joe Walsh, Former U.S. Congressman and Presidential Candidate

“Kyle Spencer has gone behind the curtain of the far-right youth movement and given us a fascinating—and terrifying—account of the personalities and tactics they deftly deploy to provide a sense of belonging for many young people. We would all be wise to read and learn from her experience.” — Rachel Vindman, cohost The Suburban Women Problem, a podcast from @RedWineBlueUSA

“In Raising Them Right, Kyle Spencer shows how the Trumpist political message has captured hearts and spleens within a large segment of America's splintered youth culture. Since the 1960s, Democrats have taken the votes of young people for granted, but Spencer expertly profiles a new generation of right-wing activists who have banded together to build a movement that is brash, transgressive, and gleefully eager to wage war on the woke. Liberals may not like what these rebellious young conservatives have to say, but they cannot ignore the growing power of their ideas and their confrontational political style.” — Andrew Rice, a contributing editor for New York magazine and the author of The Year That Broke America 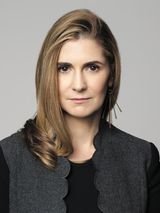 Kyle Spencer is an award-winning journalist and frequent New York Times contributor. She has written for New York magazine, Slate, the Daily Beast, the Washington Post, Politico, and many other publications.

Thank you for signing up to receive news about Kyle Spencer.