In INFINITUM, King Aja Ọba and Queen Lewa are revered across the African continent for their impressive political and military skills. Yet the future of their kingdom is in jeopardy, for the royal couple do not have an heir of their own. When the King kidnaps his son born to a concubine, Obinrin, she curses Ọba with the “gift” of immortality. After enjoying long, wonderful lives both, Queen Lewa and the crown prince die naturally, leaving the ageless bereaved King Ọba heartbroken and alone. Taking advantage of Ọba’s vulnerability, enemy nations rise to power and kill the king – or so they think.  King Aja Ọba survives the fatal attack, finally realizing the bitter fruit of Obinrin’s curse.

For millennia, the immortal Ọba wanders the earth, mourning his lost subjects and searching for a new kingdom. His journey leads him across time, allowing him to witness the trans-Atlantic slave trade, the New World, and the American Civil Rights Movement. The expansion of global technology brings about intergalactic travel, first contact with an alien species, and conflicts within and ultimately outside the known universe. Thrust into these seminal events, Ọba, now known by many as “John,” faces harrowing decisions that will determine mankind’s physical and spiritual trajectory.

In 280 plus stunningly emotional and evocative full-color images, INFINITUM presents a unique cosmic experience, addressing issues of racism, classism, gender inequity, the encroachment of technology and the spiritual cost of war, while exposing the history behind ancient mysteries.

“An amazing tale of one man’s odyssey from African king to ruler of the stars told with breathtaking visuals. INFINITUM is epic in every way! Engrossing! Powerful! Intelligent! Cinematic!” — Jerry Craft, author of the New York Times bestselling New Kid

“A merciless king is cursed to eternal life…and so begins Tim Fielder’s extraordinary tale of a Black immortal seeking redemption, an epic that takes us from the dawn of civilization to its very end of the Earth. Brilliant, bold, beautiful, and deliriously, wondrously Black, INFINTUM is what might happen if the Wakandan book of Genesis and the Afrofuturist book of Revelation decided to have a kid—nothing you read this year will come close to this amazing book.”  — Junot Diaz, Pulitzer Prize-winning author of The Brief Wondrous Life of Oscar Wao

“This sweeping tale mirrors both the history of genre literature and the African American experience.” — Publishers Weekly

“With Infinitum: An Afrofuturist Tale, Tim Fielder is pushing the genre forward (and inviting others to join).” — Syfy.com

“How, you may ask, can a story this vast not be 'central' to Infinitum? (How can it feel to me like nothing?) Well, because it is too vast.” — Bob Levin, Comics Journal 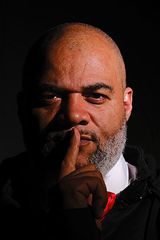 A native of Mississippi, Tim Fielder is an illustrator, cartoonist, animator and OG Afrofuturist. He is the founder of Dieselfunk Studios, an intermedia storytelling company, and is an educator for institutions such as the New York Film Academy and Howard University. Tim has served clients such as Marvel, Tri-Star Pictures, Ubisoft Entertainment, and the Village Voice, and is known for his TEDx Talk on Afrofuturism. He won the prestigious 2018 Glyph Award, and his work has been showcased in the Hammonds House Museum, Exit Art and NYU Gallatin Gallery. He attended Jackson State University, School of Visual Arts, and New York University. He lives in New York City.

Thank you for signing up to receive news about Tim Fielder.