“A teen thriller in the vein of the ‘90s horror movie The Craft . . . A beautiful meditation on meditation . . . Frequently hilarious, and thoughtful throughout.”  —The New York Times Book Review

"The Lightness could be the love child of Donna Tartt and Tana French, but its savage, glittering magic is all Emily Temple’s own." —Chloe Benjamin, New York Times bestselling author of The Immortalists

One year ago, the person Olivia adores most in the world, her father, left home for a meditation retreat in the mountains and never returned. Yearning to make sense of his shocking departure and to escape her overbearing mother—a woman as grounded as her father is mercurial—Olivia runs away from home and retraces his path to a place known as the Levitation Center.

Once there, she enrolls in their summer program for troubled teens, which Olivia refers to as “Buddhist Boot Camp for Bad Girls”. Soon, she finds herself drawn into the company of a close-knit trio of girls determined to transcend their circumstances, by any means necessary. Led by the elusive and beautiful Serena, and her aloof, secretive acolytes, Janet and Laurel, the girls decide this is the summer they will finally achieve enlightenment—and learn to levitate, to defy the weight of their bodies, to experience ultimate lightness.

But as desire and danger intertwine, and Olivia comes ever closer to discovering what a body—and a girl—is capable of, it becomes increasingly clear that this is an advanced and perilous practice, and there’s a chance not all of them will survive. Set over the course of one fateful summer that unfolds like a fever dream, The Lightness juxtaposes fairy tales with quantum physics, cognitive science with religious fervor, and the passions and obsessions of youth with all of these, to explore concepts as complex as faith and as simple as loving people—even though you don’t, and can’t, know them at all.

“Cool, dark, and pretty as a clear night sky, The Lightness delivers a coming-of-age suspense tale that starts out familiar—ominous warnings, unreliable narration—before forging its own path.” - Entertainment Weekly

“Emily Temple’s debut The Lightness grants us a bold, smart, hilarious new voice. She tells a page-turning story that’s also a detective story—psychologically wise and totally wiseassed, all while being both cynical and spiritual. A classic must read!” - Mary Karr, New York Times bestselling author of Lit

“Emily Temple’s sentences are extraordinary: musical, bristling with animal intelligence, feline in their tensed sinuosity, their lack of the usual loyalties, their readiness to pounce. This remarkable novel is made up of equal parts desire and dread; it constantly surprised me, eerily outpacing my expectations. The Lightness is a glorious debut.” - Garth Greenwell, award-winning author of What Belongs to You

“Emily Temple has woven a darkly funny, luminously drawn mystery that hits bullseye after bullseye of language and emotion. The Lightness is a book I didn't know I needed and now can't stop thinking about: swift, surprising, and utterly captivating.” - Téa Obreht, New York Times bestselling author of Inland and The Tiger’s Wife

"Who can resist a novel about a Buddhist Boot Camp for Bad Girls? This debut is funny, whip-smart and transcendently wise about friendship, family, lust and love." - Jenny Offill, New York Times bestselling author of Weather and Dept. of Speculation

"A nimble and intelligent coming-of-age story, distinguished by a setting that offers extraordinary pleasures, and sumptuous prose. The Lightness is part thriller, part fairytale, in the tradition of writers like Emily St. John Mandel and Lydia Millet.” - Kelly Link, award-winning author of Get in Trouble

“Temple’s debut is suspenseful and stylish, opening with one mysterious death and an even more mysterious disappearance, taking on the nature of religious belief and female embodiment, doing it all with wit and intelligence.” - The Boston Globe, What to Read Now

“It’s a teen thriller in the vein of the ‘90s horror movie The Craft . . . But it’s also a beautiful meditation on meditation, with readings of sacred texts and light Buddhist history, populated with girls who refuse to act the way they’re expected to; who have too much passion, too many feelings and nowhere to put them; who are on the cusp of adulthood . . . The book—frequently hilarious, and thoughtful throughout—also transcends expectations at its end.” - The New York Times Book Review

“For fans of Sweetbitter and The Girls, Emily Temple’s debut glitters with poignant observations about desire and womanhood.”  - Marie Claire, What We’re Reading

“Temple is an excellent writer . . . a rich meditation on the nature of desire and belonging.” - Los Angeles Times

“Very funny . . . She’s a gifted writer and storyteller with an unwavering command of her plot.” - Washington Post 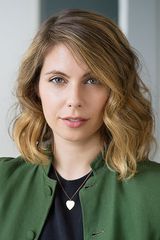 Emily Temple was born in Syracuse, New York. She earned a BA from Middlebury College and an MFA in fiction from the University of Virginia, where she was a Henry Hoyns fellow and the recipient of a Henfield Prize. Her short fiction has appeared in Colorado Review, Electric Literature's Recommended Reading, Indiana Review, Fairy Tale Review, and other publications. She lives in Brooklyn, where she is Managing Editor at Literary Hub. This is her first novel.

Thank you for signing up to receive news about Emily Temple.