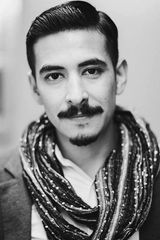 Thank you for signing up to receive news about Marcelo Hernandez Castillo.