How Back-to-the-Landers, Longhairs, and Revolutionaries Changed the Way We Eat

How Back-to-the-Landers, Longhairs, and Revolutionaries Changed the Way We Eat

An enlightening narrative history—an entertaining fusion of Tom Wolfe and Michael Pollan—that traces the colorful origins of once unconventional foods and the diverse fringe movements, charismatic gurus, and counterculture elements that brought them to the mainstream and created a distinctly American cuisine.

Food writer Jonathan Kauffman journeys back more than half a century—to the 1960s and 1970s—to tell the story of how a coterie of unusual men and women embraced an alternative lifestyle that would ultimately change how modern Americans eat. Impeccably researched, Hippie Food chronicles how the longhairs, revolutionaries, and back-to-the-landers rejected the square establishment of President Richard Nixon’s America and turned to a more idealistic and wholesome communal way of life and food.

From the mystical rock-and-roll cult known as the Source Family and its legendary vegetarian restaurant in Hollywood to the Diggers’ brown bread in the Summer of Love to the rise of the co-op and the origins of the organic food craze, Kauffman reveals how today’s quotidian whole-foods staples—including sprouts, tofu, yogurt, brown rice, and whole-grain bread—were introduced and eventually became part of our diets. From coast to coast, through Oregon, Texas, Tennessee, Minnesota, Michigan, Massachusetts, and Vermont, Kauffman tracks hippie food’s journey from niche oddity to a cuisine that hit every corner of this country.

A slick mix of gonzo playfulness, evocative detail, skillful pacing, and elegant writing, Hippie Food is a lively, engaging, and informative read that deepens our understanding of our culture and our lives today.

“An intelligently written narrative refreshingly free of personal admonitions... Kauffman comprehensively presents the history and the momentum of the organic food revolution while foraging for the keys to its increasing desirability and crossover appeal. An astute, highly informative food expose that educates without bias.” — Kirkus Reviews

“An outstanding food and cultural history…In this informative, briskly paced first book…Kauffman details how the concept of health food ‘evolved in the kitchens of young baby boomers’…Kauffman is equally thorough in tracing how these early innovators inspired the food co-ops and whole food stores that exist today.” — Publishers Weekly (starred review)

“Kauffman describes a time when a simple bowl of brown rice...and dashes of tamari could be an act as politically symbolic as hitchhiking to San Francisco with flowers in your hair... Alongside playful prose the great joy of Hippie Food is its rich cast of characters.” — Wall Street Journal

“Kauffman’s research left him with a fascinating picture of what longhairs ate and where they got it.” — NPR’s The Salt

“Briskly entertaining… I thought I knew this story, but Kauffman has added a lot to it, in the way of both fresh information and narrative verve.”
— Michael Pollan for the New York Times 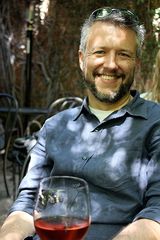 A line cook turned journalist, Jonathan Kauffman is an International Association of Culinary Professionals and James Beard Award–winning staff writer at the San Francisco Chronicle. He served as the restaurant critic at the East Bay Express, Seattle Weekly, and SF Weekly for more than a decade, and has contributed regularly to San Francisco magazine, Lucky Peach, and Wine & Spirits. His articles have also been anthologized in several editions of Best Food Writing. A native of Indiana, he now lives in San Francisco.

Thank you for signing up to receive news about Jonathan Kauffman.