Media, Culture, and the Failed Promise of Gender Equality

Media, Culture, and the Failed Promise of Gender Equality

Finalist for the Los Angeles Press Club Book Award, muse to a Givenchy fashion collection, and recommended by the The New York Times, The Skimm, US Weekly, The Washington Post, The Boston Globe, Refinery 29, Book Riot, Bitch Media, and more.

"Yarrow’s biting autopsy of the decade scrutinizes the way society reduced — or “bitchified” — women at work, women at home, women in court, even women on ice skates . . . Direct quotes from politicians, journalists and comedians about the women provide the most jarring, oh-my-god-that-really-happened portions of Yarrow’s decade excavation." — Pittsburg Post-Gazette

The nostalgic, smart, and shocking account of how the 90s set back feminism, undermined girls and women, and shaped the millennial generation from award-winning journalist, Allison Yarrow.

To understand how we got here, we have to rewind the VHS tape. 90s Bitch tells the real story of women and girls in the 1990s, exploring how they were maligned by the media, vilified by popular culture, and objectified in the marketplace.

Today echoes of 90s “bitchification” still exist everywhere we look. To understand why, we must revisit and interrogate the 1990s—a decade in which empowerment was twisted into objectification, exploitation, and subjugation.

Yarrow’s thoughtful, juicy, and timely examination is a must-read for anyone trying to understand 21st century sexism and end it for the next generation.

"In her trenchant book Allison Yarrow looks back on that decade with a heightened awareness of sexism and connected forms of discrimination. 90s Bitch establishes that many of the gender troubles of the last few years follow in a long tradition." — New Republic

"Yarrow’s biting autopsy of the decade scrutinizes the way society reduced — or “bitchified” — women at work, women at home, women in court, even women on ice skates . . . Direct quotes from politicians, journalists and comedians about the women provide the most jarring, oh-my-god-that-really-happened portions of Yarrow’s decade excavation." — Pittsburg Post-Gazette

“90s Bitch is a book we need right now. Allsion Yarrow takes the full measure of misogyny in America—then and now—and she KO’s it like the champion she is. This is a trilling read, smart and lyrical and—above all—necessary. The book would be on my recommended reading-list at any time, but during the Trump era it should be mandatory. ” — Darin Strauss, NBCC-winning author of Half A Life

“The 1990s was a decade that produced a long line of vilified women – from Anita Hill to Monica Lewinsky – and, Yarrow contends, we need to understand that moment in feminist history to appreciate our own.”  — New York Times Book Review

“Smartly written, much of this cultural critique of women in media/politics/television/music and more still rings true today.” — Book Riot

"BREAKING: Women are regularly vilified by the media simply for existing! Sadly, this isn’t anything new. In ‘90s Bitch, Allison Yarrow takes you back to the era of Anita Hill and Monica Lewinsky and Tonya Harding and examines how the media fueled America’s sexism." — Bustle

“90s Bitch reminds us that we’re not experiencing anything new. There’s already a blueprint for our moment.” — Bitch Media

“Yarrow is a skillful scene setter.” — The Los Angeles Review of Books

“Yarrow is on to something.” — NBC News 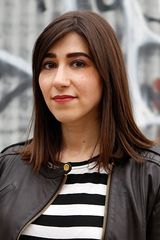 Allison Yarrow is an award-winning journalist and National Magazine Award finalist whose work has appeared in the New York Times, the Washington Post, Vox, and many others. She was a 2017 TED resident and is a 2018 grantee of the International Women’s Media Foundation. She produced the Vice documentary “Misconception,” and has appeared on the Today show, MSNBC, NPR and more. Allison was raised in Macon, Georgia and lives in Brooklyn, New York.