“The Dispossessed is a great sui generis book that, for all its cultural differences, touches us deeply. We recognize it as tragic, truthful and visionary wherever we are.” — George Szirtes, New York Times Book Review

This hypnotic, hauntingly beautiful first novel from the acclaimed, award-winning poet and author Szilárd Borbély depicts the poverty and cruelty experienced by a partly Jewish family in a rural village in the late 1960s and early 1970s.

In a tiny village in northeast Hungary, close to the Romanian border, a young, unnamed boy warily observes day-to-day life and chronicles his family’s struggles to survive. Like most of the villagers, his family is desperately poor, but their situation is worse than most—they are ostracized because of his father’s Jewish heritage and his mother’s connections to the Kulaks, who once owned land and supported the fascist Horthy regime before it was toppled by Communists.

With unflinching candor, the little boy’s observations are related through a variety of narrative voices—crude diatribes from his alcoholic father, evocative and lyrical tales of the past from his grandparents, and his own simple yet potent prose. Together, these accounts reveal not only the history of his family but that of Hungary itself, through the physical and psychic traumas of two World Wars to the country’s treatment of Jews, both past and present.

Drawing heavily on Borbély’s memories of his own childhood, The Dispossessed is an extraordinarily realistic novel. Raw and often brutal, yet glimmering with hope, it is the crowning achievement of an uncompromising talent.

“THE DISPOSSESSED is a great sui generis book that, for all its cultural differences, touches us deeply. We recognize it as tragic, truthful and visionary wherever we are… The richness, inventiveness, the sheer graphic quality of the language takes the fierce and often obscene terms of the village and offers them to us as a form of luminosity…It is, and we accept it as, life.” — George Szirtes, New York Times Book Review

“Borbély’s work promises to be a major gift to English readers. His is a massive talent, with a dark taste for the absurd placing him squarely in the company of Gogol, Kafka, and, more recently, Bohumil Hrabal and the filmmaker Emir Kusturica. . . . In Mulzet’s magnificent translation, Borbély’s prose is caustic and lucent, tart and somehow burnished. He writes in short, staccato phrases that seem bitten off, chewed at the end with an acerbic twist. He has a fantastic wit; he excavates the darkest whimsy from the bleakest of situations.” — Kirkus, starred review

“Captures the pain of poverty and prejudice in post-World War II Hungary through the eyes of a young boy...This immensely powerful portrait of poverty is at once a window into an often obscured history, and a timeless testament to the struggle of those in need.” — Publishers Weekly

“Lyrical…every page is laden with significance…A moving literary novel that compares favorably to both Elie Wiesel’s Night (1960) and Philip Hensher’s Scenes from Early Life (2013) for their disturbingly clear descriptions and autobiographical nature.” — Booklist

“Szilárd Borbély is the most enigmatic poet of recent Hungarian literature. His work, and he himself, are characterized by such extremes that, in any usual case, could never lead any single way. Straining within his life and work were fatally divergent forces: to hold them together, somehow, was his calling on this earth. And he held them together for as long as he could. Then he couldn’t bear it any longer. And we became-without him-the Dispossessed. No one will ever be able to grasp him in full.” — László Krasznahorkai, Winner of the 2015 Man Booker International Prize

“Szilárd Borbély wrote to me in a letter: ‘The frightening situation in our country…I have the feeling, the intuition that I’m living in a sick society that makes its members ill.’ In all of Hungarian poetry, Borbély was the most promising, and the most lost, of poets, one who could have looked forward to a great and brilliant future.” — Imre Kertesz, Winner of the Nobel Prize in Literature

“Szilárd Borbély has left world literature behind. If you start reading this novel, you won’t stop. It’s of existential force. Without pathos, without self-pity, with hard, true sentences.” — St. Galler Tagblatt

“Borbély has found an artistically detached language, highly poetic in its severity, in order to stave off the lapse into silence.” — Frankfurter Allgemeine Zeitung

“The novel should be considered the book of the autumn that naturally finds its place in world literature. Rooted in a specific place, a specific time, a specific life, calling out to every reader in the world about the misfortunes of humans.” — Frankfurter Rundschau

“Rarely have the horrors of a remote village been described so powerfully.” — DeutschlandRadio Kultur

“The Dispossessed reveals the destructive power of linguistic powerlessness, of keeping silent at all costs.” — Carmen Eller, Die Welt

“He was one of Hungary’s best known poets…With his death, Hungarian literature has lost one of its most important voices.” — Ilma Rakusa, Neue Zuricher Zeitung

“No one has ever written so beautifully and at the same time so without pity about the suffering in the isolated provincial villages of Hungary…His sentences have a surgical precision, and their sustained rhythm only reinforces the power of what they evoke.” — Nicole Henneberg, Frankfurter Allgemeine Zeitung

“This novel, by a celebrated Hungarian poet, depicts the world of his childhood…The narrator, a young boy whose family is shunned-it was once wealthy and is suspected of being Jewish-endures beatings, hunger, and taunts with the fatalism of someone who has never known anything else.”
— New Yorker 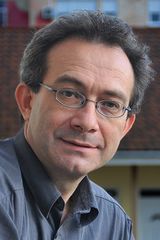 Szilárd Borbély (1963-2014) is widely acknowledged as one of the most important poets to emerge in post-1989 Hungary. He worked in a wide variety of genres, including essay, drama, and short fiction, usually dealing with issues of trauma, memory, and loss. His poems have appeared in English translation in The American Reader, Asymptote, and Poetry. Forthcoming as well is his verse collection Berlin-Hamlet from NYRB Classics. Borbély received many awards for his work, including the Attila József Prize.

Thank you for signing up to receive news about Szilard Borbely.