A Memoir of (My) Body

A Memoir of (My) Body

New York Times bestselling author Roxane Gay has written with intimacy and sensitivity about food and bodies, using her own emotional and psychological struggles as a means of exploring our shared anxieties over pleasure, consumption, appearance, and health. As a woman who describes her own body as “wildly undisciplined,” Roxane understands the tension between desire and denial, between self-comfort and self-care. In Hunger, she casts an insightful and critical eye on her childhood, teens, and twenties—including the devastating act of violence that acted as a turning point in her young life—and brings readers into the present and the realities, pains, and joys of her daily life.

With the bracing candor, vulnerability, and authority that have made her one of the most admired voices of her generation, Roxane explores what it means to be overweight in a time when the bigger you are, the less you are seen. Hunger is a deeply personal memoir from one of our finest writers, and tells a story that hasn’t yet been told but needs to be.

“A gripping book, with vivid details that linger long after its pages stop. . . . Hunger is arresting and candid. At its best, it affords women, in particular, something so many other accounts deny them—the right to take up space they are entitled to, and to define what that means.” — Atlantic

“The book’s short, sharp chapters come alive in vivid personal anecdotes. . . . And on nearly every page, Gay’s raw, powerful prose plants a flag, facing down decades of shame and self-loathing by reclaiming the body she never should have had to lose.” — Entertainment Weekly

“Bracingly vivid. . . . Remarkable. . . . Undestroyed, unruly, unfettered, Ms. Gay, live your life. We are all better for having you do so in the same ferociously honest fashion that you have written this book.” — Los Angeles Times

“Searing, smart, readable. . . . “Hunger,” like Ta-Nehisi Coates’ “Between the World and Me,” interrogates the fortunes of black bodies in public spaces. . . .  Nothing seems gratuitous; a lot seems brave. There is an incantatory element of repetition to “Hunger”: The very short chapters scallop over the reader like waves.” — Newsday

“Her spare prose, written with a raw grace, heightens the emotional resonance of her story, making each observation sharper, each revelation more riveting. . . . It is a thing of raw beauty.” — USA Today

“Powerful. . . . fierce. . . . Gay has a vivid, telegraphic writing style, which serves her well. Repetitive and recursive, it propels the reader forward with unstoppable force.” — Lisa Ko, author of The Leavers

“This is the book to read this summer . . . she’s such a compelling mind . . . . Anyone who has a body should read this book.” — Isaac Fitzgerald on the TODAY Show

“Unforgettable. . . . Breathtaking. . . . We all need to hear what Gay has to say in these pages. . . . Gay says hers is not a success story because it’s not the weight-loss story our culture demands, but her breaking of her own silence, her movement from shame and self-loathing toward honoring and forgiving and caring for herself, is in itself a profound victory.” — San Francisco Chronicle

“Hunger is Gay at her most lacerating and probing. . . . Anyone familiar with Gay’s books or tweets knows she also wields a dagger-sharp wit.” — Boston Globe

“Wrenching, deeply moving. . . a memoir that’s so brave, so raw, it feels as if [Gay]’s entrusting you with her soul.” — Seattle Times

“It is a deeply honest witness, often heartbreaking, and always breathtaking. . . . Gay is one of our most vital essayists and critics.” — Minneapolis Star Tribune

“This raw and graceful memoir digs deeply into what it means to be comfortable in one’s body. Gay denies that hers is a story of “triumph,” but readers will be hard pressed to find a better word.” — Publishers Weekly (starred review)

“A heart-rending debut memoir from the outspoken feminist and essayist. . . . An intense, unsparingly honest portrait of childhood crisis and its enduring aftermath.” — Kirkus Reviews (starred review)

“Roxane Gay is the brilliant girl-next-door: your best friend and your sharpest critic. . . . She is by turns provocative, chilling, hilarious; she is also required reading.” — People

“[Gay is] hilarious. But she also confronts more difficult issues of race, sexual assault, body image, and the immigrant experience. She makes herself vulnerable and it’s refreshing.” — Tanvi Misra, Atlantic, "The Best Book I Read This Year" 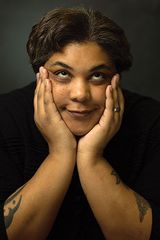 Roxane Gay is the author of the essay collection Bad Feminist, which was a New York Times bestseller; the novel An Untamed State, a finalist for the Dayton Peace Prize; the memoir Hunger, which was a New York Times bestseller and received a National Book Critics Circle citation; and the short story collections Difficult Women and Ayiti. A contributing opinion writer to the New York Times, she has also written for Time, McSweeney’s, the Virginia Quarterly Review, the Los Angeles Times, The Nation, The Rumpus, Bookforum, and Salon. Her fiction has also been selected for The Best American Short Stories 2012, The Best American Mystery Stories 2014, and other anthologies. She is the author of World of Wakanda for Marvel. She lives in Lafayette, Indiana, and sometimes Los Angeles.

Thank you for signing up to receive news about Roxane Gay.