A gripping novel of culture clash and murder: as summer draws to a close, a small Long Island town is gripped by a series of mysterious deaths—and one young man, a loner taken in by a local, tries to piece together the crimes before his own time runs out.

Orient is an isolated town on the north fork of Long Island, its future as a historic village newly threatened by the arrival of wealthy transplants from Manhattan—many of them artists. One late summer morning, the body of a local caretaker is found in the open water; the same day, a monstrous animal corpse is found on the beach, presumed a casualty from a nearby research lab. With rumors flying, eyes turn to Mills Chevern—a tumbleweed orphan newly arrived in town from the west with no ties and a hazy history. As the deaths continue and fear in town escalates, Mills is enlisted by Beth, an Orient native in retreat from Manhattan, to help her uncover the truth. With the clock ticking, Mills and Beth struggle to find answers, faced with a killer they may not be able to outsmart.

Rich with character and incident, yet deeply suspenseful, Orient marks the emergence of a novelist of enormous talent.

“Engrossing….[t]he characters are drawn in vivid detail, and the atmosphere is thickly enveloping.” - New York Times

“A classic page-turner that would make a fine companion to a towel and beach chair, but also delves deeper into modern paranoia regarding money, class and sexuality.” - Newsday

“A gorgeously written book whose literary chops are beyond doubt. Come for the prose, and stay for the murders.” - USA Today

“This is beach reading that’s as intelligent as it is absorbing.” - People

“Thrilling and suspenseful with subtle shots of hijinks hilarity, this book will have you feeling like you can’t possibly turn the pages fast enough.” - Elle.com

“Bollen keeps you guessing until the end of this intriguing, fatalistic novel.” - Miami Herald

“…a seductive new literary thriller….Orient is a novel of sophisticated malice filled with people we love to loathe, and all the better for it.” - New York Daily

“The test of a thriller is arguably in the resolution, and Orient’s is satisfyingly tense. The guessing game takes in the whole community, all well-drawn, and all with motives to kill…” - Financial Times

“Bollen takes a real place--the North Folk of Long Island--and weaves a mesmerizing fictional web of characters and mysteries into a story that is as viscerally thrilling as it is intellectually precise.” - BookPage

“The writer keeps us guessing about the perpetrator(s) behind the murders until the last chapter, but it is the placement of the story in such a well-detailed, realistic environment that separates Orient from most other books in the genre.” - CT News

Advance Praise for Orient
“The quaint seaside village of Orient is not as pleasant as it seems, and Christopher Bollen will hold you spellbound as he reveals its secrets. A truly well-crafted and literate murder mystery that recalls the worlds of both P.D. James and Twin Peaks.” - Nelson DeMille

“Orient is a compelling novel of tragic suspense. Bollen has a gift for tightly drawn characters and an ominous sense of place.” - A. M. Homes

“The Great Gatsby meets Donna Tartt. Suspenseful, beautifully written, and wonderfully atmospheric, Orient is that rare treat that is both a page-turner and a book you will want to savor.” - Philipp Meyer

“Orient is a taut and elegant suspense novel about strangers and strangeness, suspicion and forgiveness, reinvention and confession.” - Joshua Ferris, author of To Rise Again At A Decent Hour 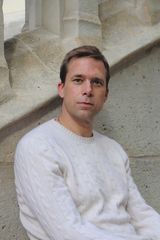 Christopher Bollen is the author of Orient, which was an NPR Best Book of the Year, and the critically acclaimed Lightning People. He is the editor at large of Interview magazine. His work has appeared in GQ, the New York Times, New York magazine, and Artforum, among other publications. He lives in New York City.

Thank you for signing up to receive news about Christopher Bollen.