From childhood, Saira Qader broke the boundaries between her family’s traditions and her desire for independence. A free-spirited and rebellious Muslim-American of Indo-Pakistani descent, she rejected constricting notions of family, duty, obligation, and fate, choosing instead to become a journalist, the world her home. Five years later, tragedy strikes, throwing Saira’s life into turmoil. Now the woman who chased the world to uncover the details of other lives must confront the truths of her own. In need of understanding, she looks to the stories of those who came before-her grandparents, a beloved aunt, her mother and her father.

“A moving meditation on the meaning of family, tradition, and the ties that bind. The Writing on MyForehead is lyrical and touching.”-Khaled Hosseini

“THE WRITING ON MY FOREHEAD is not only a family history but also a social history with an ambitious arc. Haji deftly illustrates how the Qaders’ lives intersect with defining world events. (Haji is a) talented new writer of sense and a distinct sensibility.” - San Francisco Chronicle

“A brainy, beautiful braid of stories about three generations of a Muslim family. This book, if widely read, will go a long way toward deconstructing stereotypes about American Muslims, and that, on top of its value as a work of fiction, makes it a treasure.” - Minneapolis Star Tribune

“THE WRITING ON MY FOREHEAD by Nafisa Haji explores how a family’s history––one spanning continents, love affairs, and political revolutions––can both haunt and heal.” - Parade (Parade Pick)

“(A) deeply moving and beautifully written novel about different generations of an Indo-Pakistani family takes the reader on an emotional journey into how family and traditions define us and our choices in life. It’s a fast read, but its deeper meaning resonates long after the last page.” - Associated Press

“This impressive debut follows the life of Saira Qader, a Muslim American of Indo-Pakistani descent who rejects the cultural traditions of family and duty to become a world-roving journalist.” - Sacramento Bee

“Just as Saira’s mother tenderly traced the words of protective prayers on her daughters’ foreheads each night, so too does this book leave a stamp on us. As we open ourselves to this culture, it becomes inscribed within us, as if its rich history was written onto our foreheads.” - Chattanooga Times Free Press

“Grab a cup of chai (tea), and curl up in a big chair to read; time will fly and you’ll want to refill your cup before you even think about putting this book down. (The story) will stay with you for a long while.” - Wichita Falls, TX, Times Record News

““An elegantly written look at family dynamics and how cultural traditions shape lives. Poses questions and doesn’t give all the answers, allowing the reader to draw his or her own conclusions and continue the dialogue long after finishing the book.” - Deseret News

“A moving meditation on the meaning of family, tradition, and the ties that bind. Lyrical and touching. A story of mother and daughters, and of a young Muslim woman at crossroads, shaped by the forces of her past, her religion, her roots, her culture, and her own determined will.” - Khaled Hosseini, The Kite Runner and A Thousand Splendid Suns

“(An) impressive debut. Haji achieves an effortless commingling of family and social history in this intricate story that connects a young woman and her family over continents and through generations.” - Publishers Weekly

“The struggles of second-generation immigrants are well presented, calling to mind novels like Monica Ali’s Brick Lane. In addition, the climax is powerful and satisfying, as Saira belatedly comes to recognize the inescapable tug of family. Recommended for all libraries.” - Library Journal 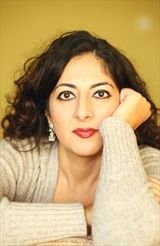 Nafisa Haji's first novel, The Writing on My Forehead, was a finalist for the Northern California Independent Booksellers Association Book of the Year Award. An American of Indo-Pakistani descent, she was born and raised in Los Angeles and now lives in northern California with her husband and son.

Thank you for signing up to receive news about Nafisa Haji.