“One of the most gripping and important books of our era.” — Walter Isaacson

Benazir Bhutto returned to Pakistan in October 2007, after eight years of exile, hopeful that she could be a catalyst for change. Upon a tumultuous reception, she survived a suicide-bomb attack that killed nearly two hundred of her compatriots. But she continued to forge ahead, with more courage and conviction than ever, since she knew that time was running out—for the future of her nation and for her life.

In Reconciliation, Bhutto recounts in gripping detail her final months in Pakistan and offers a bold new agenda for how to stem the tide of Islamic radicalism and to rediscover the values of tolerance and justice that lie at the heart of her religion. She speaks out not just to the West but also to the Muslims across the globe. Bhutto presents an image of modern Islam that defies the negative caricatures often seen in the West. After reading this book, it will become even clearer what the world has lost by her assassination

“Gripping. . . . An urgent warning to her fellow Muslims and to Western democratic powers—a warning one hopes may now find greater resonance with both audiences. . . . A cry from the grave to save her faith, her homeland and East-West realtions from looming catastrophe. . . . Bhutto wrote the book with uncharacteristic bluntness, suggesting an awareness that both she and her country had little time left.” - Washington Post Book World

“Benazir Bhutto will go down in history as a courageous leader who risked—and lost—her life in the service not only of her nation, but of values shared by us all. Anyone interested in Pakistan, democracy, or the course of Islam in the coming century should read this fascinating and important book.” - Joe Biden

“Benazir Bhutto’s book is a powerful and insightful analysis of the formidable challenges that confronted an extraordinary woman who paid the ultimate price for daring to attempt to bring democracy to Pakistan. President Kennedy would have called her a Profile in Courage. Her vision of Islam in the modern world sets a standard of peace, prosperity, equality, and reconciliation.” - Senator Ted Kennedy

“This book is an eloquent reflection of traits which defined the life of Benazir Bhutto—an unshakable optimism about the future, a firm belief in the power of dialogue, and a commitment to democracy.The strength of her message of hope underscores how much was lost in her tragic death.” - Nancy Pelosi

“This is one of the most gripping and important books of our era. It’s a powerful personal narrative of an astonishingly brave woman. It’s also a brilliant manifesto for challenging radical Islam. Benazir Bhutto was an intense but charming woman driven by a crucial mission. Her death makes this beautiful book all the more poignant, and also more necessary.” - Walter Isaacson

“This is a courageous and powerful answer to hatred and intolerance, written by an extraordinary woman. Reading Benazir Bhutto’s Reconciliation shows just how much we lost with her death. You’ll finish it and mourn for what might have been.” - Arianna Huffington

“Pakistan has become the critical battlefield in the so-called war on terror. Reconciliation is the story of a courageous woman and her struggle for democracy and moderation in Islam. Benazir Bhutto, not the extremists who killed her, represented the vast majority of Pakistani Muslims and this book is a reminder of how much we have lost.” - Peter Galbraith

“Fascinating. . . . The most interesting part of Bhutto’s book is her argument with Samuel Huntington and the rest of the ‘Clash of Civilizations’ crowd, who said that a confrontation between the West and militant Islam was inevitable after the Cold War was resolved. . . . Bhutto goes well beyond the typical responses by Muslim political leaders.” - Los Angeles Times

“Ms. Bhutto’s own life reads like a Greek tragedy. . . . Her platform, laid out in this volume as democracy in Pakistan and a vision of reconciliation between the Muslim world and the West, was an optimistic one in which globalization promotes tolerance, not resentment. It was a platform deeply shaken by her own untimely death.” - Michiko Kakutani, New York Times

“Fascinating. . . . Stirring and important. . . . A book of enormous intelligence, courage, and clarity. It contains the best-written and most persuasive modern interpretation of Islam I have read. . . . People have often asked when respected Muslim leaders would denounce Islamic extremism and articulate a forward-looking and tolerant view of their religion. Well, Bhutto has done it in full measure.” - Fareed Zakaria, New York Times Book Review

“Benazir Bhutto was nothing if not courageous.” - The Economist 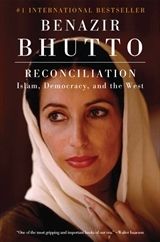 Benazir Bhutto was the prime minister of Pakistan from 1988 to 1990 and from 1993 to 1996, and the chairperson of the Pakistan Peoples Party. Born in 1953 in Karachi, Bhutto was the first woman ever to lead a Muslim state. She lived in exile from 1999 until her return to Pakistan in October 2007, two months before her assassination.

Thank you for signing up to receive news about Benazir Bhutto.