A Journey to the Heart of Three Faiths

A Journey to the Heart of Three Faiths

Bruce Feiler embarks on another one-of-a-kind journey: a search for the man at the heart of three of the world’s most influential religions — and at the center of today’s deadliest wars. Abraham, the New York Times bestseller, now features a new afterword by the author and a P.S. Section.

Here is one man’s personal quest to better understand the patriarch of Judaism, Christianity, and Islam, the man all three religions call “God’s Friend.” Abraham is the lynchpin of the Arab-Israeli Conflict. He is the focal point of the battle between the United States and Islamic terrorists. He is the father of twelve million Jews, one billion Muslims, and three billion Christians. Feiler uncovers many little known details about Abraham, including his defining roles in the Jewish New Year, the Easter liturgy, and the Muslim Hajj. From his revolutionary call to leave the land of his family, to his pain at banishing his beloved first son Ishmael, to his dramatic decision to sacrifice his favored son Isaac, Abraham has defined what it means to be a person of faith. Bruce Feiler is the bestselling author of Where God Was Born, Walking the Bible and Abraham, as well as four previous books of nonfiction. Feiler is a frequent contributor to NPR’s “All Things Considered,” a contributing editor for Gourmet, and has written for The New Yorker, the New York Times Magazine, the Washington Post, USA Today, Esquire, and Conde Nast Traveler. “A winning mix of insight, passion, and historical research ... [This book] provides a basis for fostering genuine communication.” — Christian Science Monitor

“This is a joy to read.” - Publishers Weekly (starred review)

”A vivid and discerning tour through a land that reflects this epochal figure’s life of exile, questioning...and faith.” - Kirkus Reviews

“Scrupulously fair in reporting the thinking of all of the traditions...appealing.” - Nashville Tennessean

“Captures the beauty and desolation of the landscape, the tension of its shared holy places...” - Oregonian 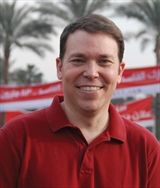 Bruce Feiler is the author of six consecutive New York Times bestsellers, including Abraham, Where God Was Born, America's Prophet, The Council of Dads, and The Secrets of Happy Families. He is a columnist for the New York Times, a popular lecturer, and a frequent commentator on radio and television. He lives in Brooklyn with his wife and twin daughters.

Thank you for signing up to receive news about Bruce Feiler.