How George W. Bush and His Corporate Pals Are Plundering the Country and Hijacking Our Democracy

How George W. Bush and His Corporate Pals Are Plundering the Country and Hijacking Our Democracy

In this passionate, and persuasively argued book, Robert F. Kennedy, Jr. charges that the George W. Bush White House has ordered every federal agency that oversees environmental programs to roll back rules aimed at the oil, coal, logging, and mining industries, as well as automakers, developers, and corporate agribusiness-much to the detriment of public health and safety. He also contends that the Bush administration has used smartly crafted, deceptive euphemisms to deceive the public, that it has manipulated and suppressed scientific data, and that it has pursued a policy of rampant influence peddling and corporate cronyism, especially with regard to its energy programs. Crimes Against Nature is about far more than the environment-it is about an administration, in Kennedy’s view, that is in service of private profits and personal power.

“A meticulous, elegant and devastating account of an administration that . . . seems to get a kick out of sticking it to the planet. Scary stuff.”-New York Post 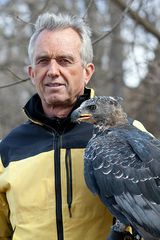 Robert F Kennedy, Jr., an environmental attorney and activist, is the president of Waterkeeper Alliance. He is the author of numerous books, including Crimes Against Nature and The Riverkeepers. His writing has appeared in the New York Times, the Atlantic, the Wall Street Journal, and the Washington Post, among other publications.

Thank you for signing up to receive news about Robert F. Kennedy Jr..