A Portrait of a Muslim as a Young Man

A Portrait of a Muslim as a Young Man

Children of Dust chronicles Ali Eteraz’s coming of age in an Islamic fundamentalist society, detailing the ways in which people internalize and submit to religious extremism and social alienation. This is a harrowing narrative of abuse and violence in rural Pakistan, as well as an exploration of the rise of religious fanaticism.

Having seen his country dominated by the ideology of the Taliban, his extended family caught up in a fight for survival and becoming a target of Al-Qaeda himself, Eteraz discusses how he managed to reconcile himself with the violence he experienced as a youth without becoming consumed by it. As a human rights lawyer and activist, he also reflects on the possibilities of reform in fundamentalist Islam. Ali Eteraz is a writer, activist and international lawyer who has worked at the United States Department of Justice. He is the founder of an Islamic think tank dedicated to legislative and legal reform in the Muslim world. He writes for the Huffington Post and the Guardian’s “Comment is Free” section, and has been a guest blogger on Jewcy.com. His essays on Islam have appeared in Killing the Buddha, Counterpunch, Agonist, The Revealer and Identity Theory. He lives in Las Vegas, New York and Kuwait. His website is www.alieteraz.com. “Throughout his meandering spiritual journey, Eteraz’s faith has given him great pride and contentedness but has also been a source of deep shame, anger and frustration. This emotional struggle is the backdrop for his memoir, Children of Dust, which chronicles his childhood in Pakistan, his family’s immigration to the United States and finally his return to Asia as an adult ... compelling.” – Washington Post

[Eteraz’s] adventures are a heavenly read. - O, The Oprah Magazine

Wildly entertaining, Children of Dust is memoir of the first order, as genuinely American as Muslim, unraveling the perilous mystery that is modern Pakistan as only memoir can. Unlike others, Eteraz has truly ‘been there,’ and we are all the better for it. - Murad Kalam, author of Night Journey

The gripping story of a young man exposed to both the beauty and ugliness of religion. - Laila Lalami, author of Secret Son

A love letter to one man’s fading faith, Children of Dust is a gift and a necessity, and should be read by believers and nonbelievers alike. Sure to deepen our collective conversation about religion and reason, loyalty and universality, and our geopolitical aims, it’s also just plain fun to read. - Yael Goldstein Love, author of Overture: A Novel and The Passion of Tasha Darsky

“In Children of Dust . . . we follow the journey of a soul determined to reconcile the many worlds that live inside him. In a time rife with cultural misinterpretations and generalizations, sensitive accounts such as Children of Dust are invaluable assets.” - Laleh Khadivi, novelist, author of The Age of Orphans

An astoundingly frightening, funny, and brave book. At a time when debate and reform in the larger landscape of the Muslim world, and in countries like Pakistan in particular, are virtually non-existent, Children of Dust is a call to thought. - Fatima Bhutto, poet and writer

This elegantly written memoir traces [Eteraz’s] relationship with the religion of his birth, from his childhood in Pakistan, where he feared beatings at the madrassa, to adulthood in the U.S. . . . Thoughtful and wry, he offers glimpses of a changing Pakistan and a U.S. immigrant’s journey, too. - Booklist

“A gifted writer and scholar, Eteraz is able to create a true-life Islamic bildungsroman as he effortlessly conveys his comingof- age tale while educating the reader. When his religious awakening finally occurs, his catharsis transcends the page.” - Publishers Weekly

“A …complex story of a young man’s journey into the heart of his own faith.… Knowledgeable, humorous and personable, Eteraz is an engaging storyteller.” - San Jose Mercury News

“Eteraz’s memoir is a fascinating, elucidating account of Muslim mores and education. In these times when fears of Islam are high, it is well worth reading.” - The Providence Journal

“Children of Dust is a coming of age story, filled with warmth and humour, but it also explores some very serious questions… a powerful and marvellous personal memoir.” - EnterStageRight.com

“...Not only for people who are interested in Pakistan or Islamic issues, but for anyone looking for a compelling personal story. Because ultimately, this memoir isn’t about religion but about a fascinating quest for selffulfillment.” - PickledPolitics.com

“Written with vivid descriptions, a smattering of urdu words and a very strong sense of nationalism... Children of Dust is an apt description of a thinking muslim.” - TheFourthArticle.com

“Ali’s story is long and heart-rending, sometimes funny, sometimes frustrating, and his willingness to share it makes us all better off in the telling and re-telling as we reflect on our covenants and baggage.” - Pakistaniaat: A Journal of Pakistan Studies 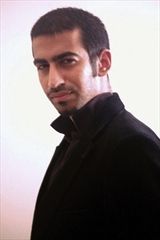 Ali Eteraz was born in Pakistan and has lived in the Middle East, the Caribbean, and the United States. A graduate of Emory University and Temple Law School, he was selected for the Outstanding Scholar's Program at the United States Department of Justice and later worked in corporate litigation in Manhattan. He has published articles in Dissent, Foreign Policy, AlterNet, and altMuslim; and is a regular contributor to The Guardian UK.

Thank you for signing up to receive news about Ali Eteraz.