Being and Time was first published in 1927. One of the most important philosophical works of all time, it has had tremendous influence on philosophy, literature, and psychology, and literally changed the intellectual map of the modern world. In it, Martin Heidegger examines an issue that goes all the way back to the ancient Greeks–the question of what it means “to be.” Being and Time has had a tremendous impact on existentialism, along with most postmodern thought. To read this book is to rethink what it means to be a human, what it means to exist in this world, and even what a “world” is.

This edition of John Macquarrie and Edward Robinson’s definitive translation of Being and Time also features a new foreword by Heidegger scholar Taylor Carman. 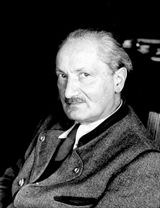 Martin Heidegger (1889-1976) was born in Baden-Württemberg, Germany. He studied at the University of Freiburg and became a professor at the University of Marburg in 1932. After publishing his his magnum opus, Being and Time (1927), he returned to Freiburg to assume the chair of philosophy upon Husserl's retirement.

Thank you for signing up to receive news about Martin Heidegger.