This Child Will Be Great

Memoir of a Remarkable Life by Africa's First Woman President

This Child Will Be Great

Memoir of a Remarkable Life by Africa's First Woman President

In January 2006, after the Republic of Liberia had been racked by fourteen years of brutal civil conflict, Ellen Johnson Sirleaf—Africa's "Iron Lady"—was sworn in as president, an event that marked a tremendous turning point in the history of the West African nation.

In this stirring memoir, Sirleaf shares the story of her rise to power, including her early childhood; her experiences with abuse, imprisonment, and exile; and her fight for democracy and social justice. She reveals her determination to succeed in multiple worlds, from her studies in the United States to her work as an international bank executive, to campaigning in some of Liberia's most desperate and war-torn villages and neighborhoods. It is the tale of an outspoken political and social reformer who fought the oppression of dictators and championed change. By telling her story, Sirleaf encourages women everywhere to pursue leadership roles at the highest levels of power, and gives us all hope that we can change the world.

“This is the incredible story of a woman who spent her life talking tough to the lunatics surrounding her. It is an accessible walk through Liberian history, told by someone who was somehow always in the center of the political storm.” - New York Times Book Review

“Exceptionally well written, a true story that seems as much a thriller as the remembrances of an ambitious and brave woman. . . . This timely book, essential for anyone who hopes to understand West Africa in general and Liberia in particular, is a lesson in courage and perserverance.” - Washington Post

“An inspiring inside look at a nation struggling to rebuild itself and the woman now behind those efforts.” - Booklist 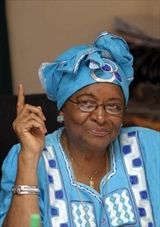 Ellen Johnson Sirleaf has received several prestigious awards, including the United States Presidential Medal of Freedom. She holds numerous degrees, among them a master's in public administration from Harvard University. President Sirleaf lives in Monrovia, Liberia.

Thank you for signing up to receive news about Ellen Johnson Sirleaf.