Adventures Chasing the Divine, an Autobiography

Adventures Chasing the Divine, an Autobiography

Tales of Wonder is the personal story of the man who taught a nation about the great faiths of the world and his fascinating encounters with the people who helped shape the 20th century.

Among the many amazing events and people, Tales of Wonder includes Huston Smith’s stories of being raised by Christian missionary parents in China during the rise of the Chinese Communist Party, attending the first meeting of the United Nations, inviting Rev. Martin Luther King Jr. to Washington University, doing hallucinogens with Timothy Leary and discussing metaphysics with Ram Dass and Andrew Weil. This autobiography tells the story of Smith’s experiences of historic turning points and encounters with many of the people that shaped the 20th century.

Poignant and readable, Smith recounts professional adventures—meeting Martin Luther King Jr.,befriending Aldous Huxley and the Dalai Lama, dropping acid with Timothy Leary . . . this is what it feels like to have lived a long and interesting life. - Newsweek

In his lush new memoir, the religious scholar Smith dances among the whirling dervishes in Iran, camps with the Aborigines in Australia, shares a chuckle with a gaggle of Masai warriors on the darkening Serengeti plains. Each anecdote reveals Smith’s sense of marvel at the strange bounty of the world - Washington Post Book World

In this delightful autobiography, Smith tells us how he became the dean of world religions. Intellectual playfulness is definitely the spirit with which this book was written. Right to his final act, Smith is proving to be the consummate professor, giving us a valuable master class on faith and life. - San Francisco Chronicle Book Review

Smith has long been our clearest and most radiant explorer of all the world’s great religions. Thank heavens for such wisdom, delivered with light and fire! - —Pico Iyer

One of our foremost scholars and interpreters of the world’s religions . . . What he has learned, he has applied to life. - —Bill Moyers

My admiration for Huston Smith’s work is boundless. With each new book I have been astonished, edified, and greatly heartened by his brilliant mind and heart. He is the wisest, sanest religious scholar of them all, and so wonderfully readable. - —Anne Lamott

“Smith parts the curtain on his past and says, “Look!” with the enthusiasm of a child--something he has not yet lost at age 90. The result is a joyous romp with a favorite uncle among holy places and mystics--the most interesting of them the author of the book.” - Publishers Weekly

“Remarkably brief and humbly written for a man of Smith’s fame and accomplishment, Tales deals simply with his life and his encounters with the great and the good (Eleanor Roosevelt, D.T. Suzuki, and Frithjof Schuon, to name a few). Highly recommended.” - Library Journal

Smith . . . [has a gaze that] bespeaks mischief, curiosity, bluntness and wonder . . . In an age of generalized fear and “just say no,” Smith, who taught for years at Berkeley, a venerated figure there, has said “yes” to life’s possibilities. - San Jose Mercury News

“It is the pulse of Smith’s humanity that breathes life into Tales of Wonder.” - CNN.com 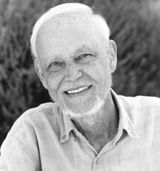 Huston Smith is internationally known and revered as the premier teacher of world religions. He is the focus of a five-part PBS television series with Bill Moyers and has taught at Washington University, the Massachusetts Institute of Technology, Syracuse University, and the University of California at Berkeley. The recipient of twelve honorary degrees, Smith's fifteen books include his bestselling The World's Religions, Why Religion Matters, and his autobiography, Tales of Wonder.

Thank you for signing up to receive news about Huston Smith.