World from the Twenties to the Nineties, The

World from the Twenties to the Nineties, The

From century to century, the meaning of “modernity” constantly evolves. In this insightful and fascinating book, Paul Johnson argues that modern times as we know them began on May 29, 1919, when photographs of a solar eclipse confirmed the truth of Einstein’s theory of relativity. This scientific revelation literally redefined how humanity sees the universe. From there, Johnson takes students on a whirlwind tour of the 20th century.

With his trademark wit and intelligence, Johnson explores the impact of psychoanalysis, Marxism and existentialism, major personalities like Roosevelt, Gandhi and John F. Kennedy, and events ranging from the Russian Revolution to the end of the Cold War. Incisive, stimulating and frequently controversial, Modern Times combines fact, anecdote, incident and portrait in a comprehensive analysis of how the modern age came into being and where it is headed. Paul Johnson is the author of A History of the American People, A History of the Jews, A History of the English People, Intellectuals, and The Birth of the Modern. He lives in London. “A latter-day Mencken, Johnson is witty, gritty, and compulsively readable.” — Foreign Affairs 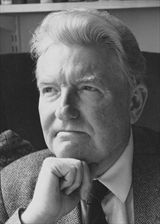 Paul Johnson is a historian whose work ranges over the millennia and the whole gamut of human activities. He regularly writes book reviews for several UK magazines and newspapers, such as the Literary Review and The Spectator, and he lectures around the world. He lives in London, England.

Thank you for signing up to receive news about Paul Johnson.