During 1954 and 1955, John F. Kennedy, then a U.S. senator, chose eight of his historical colleagues, including John Quincy Adams, Daniel Webster, and Thomas Hart Benton, to profile for their acts of astounding integrity in the face of overwhelming opposition.

Awarded the Pulitzer Prize in 1957, Profiles in Courage — now featuring a new introduction by Caroline Kennedy, as well as Robert F. Kennedy’s foreword written in 1964 for the memorial edition — resounds with timeless lessons on the most cherished of virtues and is a powerful reminder of the strength of the human spirit. John F. Kennedy (1917-1963) was President of the United States from 1961 to 1963. He was the youngest man ever elected to the Oval Office and the first Roman Catholic president. “A book that deserves reading by every American.” — Springfield Republican

“It is refreshing and enlightening to have a first-rate politician write a thoughtful and persuasive book about political integrity.” - New York Times Book Review

“A book that deserves reading by every American.” - Springfield Republican 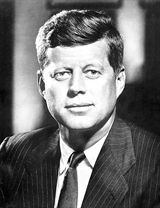 Photo courtesy of The Granger Collection

John F. Kennedy (1917-1963) was president of the United States from 1961 to 1963. At forty-three, he was the youngest man ever elected to the Oval Office and the first Roman Catholic president.

Thank you for signing up to receive news about John F. Kennedy.